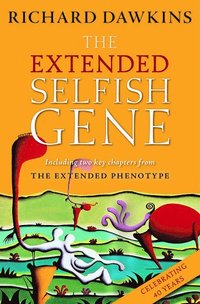 Matt Ridley, Nature From the moment of its publication 40 years ago, it has been a sparkling best-seller and a scientific game-changer.


New York Times Review from previous edition The sort of popular science writing that makes the reader feel like a genius.

This book should be read, can be read, by almost everyone. It describes with great skill a new face of the theory of evolution. W.D. Hamilton, Science

The exciting theories and their wide implications are explaned with clarity, wit and enthusiasm.
Peter Parker, Sunday Times

Dawkins demonstrates that complex, theoretical or mathematical ideas can be expressed rigorously, in plain English. The book remains an excellent way for those who have not been trained in evolution to understand modern arguments.
Trends in Ecology and Evolution

A splendid example of how difficult scientific ideas can be explained by someone who understands them and is willing to take the trouble. The New Yorker

the reader will come away with a clear understanding of kin selection, evolutionary stable strategies, and similar staples of the literature on evolutionary theories of animal behaviour. This is a considerable achievement.'
Times Higher Education Supplement

Animal Behaviour Buy this book, read it and recommend it to your students...There is still nothing else quite like it. Not only are the new chapters and endnotes worthy additions to the original, but the 1976 text comes up as fresh as a primrose and, in its way, nearly as perfect.

Benjamin Woolley, The Listener What is so refreshing about Dawkins is that he has confidence in the scientific method, in the testing of beliefs to destruction, no matter how cherished they may be.

'Scientists give every appearance of being addicts, and science is their vice. That is one reason why progress in science is so rapid. I for one have benefited a great deal from Dawkins's addiction.'
David L. Hull, Nature

H. Allen Orr, New York Review of Books Dawkins's first book, The Selfish Gene, was a smash hit... Best of all, Dawkins laid out this biology - some of it truly subtle - in stunningly lucid prose. (It is, in my view, the best work of popular science ever written.)

Robin McKie, The Observer The Selfish Gene is a classic.

The Independent A genuine cultural landmark of our time.

New York Times Review from previous edition The sort of popular science writing that makes the reader feel like a genius.

Jonathan Cowie, Concatenation A splendid edition with a new introduction as well as (importantly) the introductions to the previous editions.

Professor Richard Dawkins is one of the most influential science writers and communicators of our generation. He was the first holder of the Charles Simonyi Chair of the Public Understanding of Science at Oxford, a position he held from 1995 until 2008, and is Emeritus Fellow of New College, Oxford. His bestselling books include The Selfish Gene (1976), The Extended Phenotype (1982) and its sequel The Blind Watchmaker (1986), River Out of Eden (1995), Climbing Mount Improbable (1996), Unweaving the Rainbow (1998), A Devil's Chaplain (2004), The Ancestor's Tale (2004), and The God Delusion (2007). He has won many literary and scientific awards, including the 1987 Royal Society of Literature Award, the 1990 Michael Faraday Award of the Royal Society, the 1994 Nakayama Prize for Human Science, the 1997 International Cosmos Prize, and the Nierenberg Prize for Science in the Public Interest in 2009.