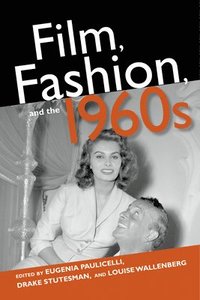 av Eugenia Paulicelli, Drake Stutesman, Louise Wallenberg
Häftad Engelska, 2017-09-11
349
Köp
Spara som favorit
Finns även som
Visa alla 2 format & utgåvor
A fascinating look at one of the most experimental, volatile, and influential decades, Film, Fashion, and the 1960s, examines the numerous ways in which film and fashion intersected and affected identity expression during the era. From A Hard Day's Night to Breakfast at Tiffany's, from the works of Ingmar Bergman to Blake Edwards, the groundbreaking cinema of the 1960s often used fashion as the ultimate expression for urbanity, youth, and political (un)awareness. Crumbling hierarchies brought together previously separate cultural domains, and these blurred boundaries could be seen in unisex fashions and roles played out on the silver screen. As this volume amply demonstrates, fashion in films from Italy, France, England, Sweden, India, and the United States helped portray the rapidly changing faces of this cultural avant-gardism. This blending of fashion and film ultimately created a new aesthetic that continues to influence the fashion and media of today.
Visa hela texten

This collection of essays is enlightening and fruitful in demonstrating the richness of the scholarship regarding fashion and film, evident in the range of voices and range of conceptual approaches. This would be an invaluable read for scholars and fans of fashion and film costume, as well as for film historians, particularly with an interest in 1960s European film. * Historical Journal of Film, Radio and Television * With a focus on the most turbulent decade of the twentieth century, the collection of essays in Film, Fashion, and the 1960s captures a period profoundly marked by cultural innovation, political activism, and a rising consumer demographic that questioned conventional boundaries and reshaped the urban environment. . . . Film, Fashion, and the 1960s is an important resource that offers an additional perspective on the collaboration between directors and costume designers and may provide inspiration for further discussions. Most importantly, the range of topics illuminated by the analysis of the intermediality of cinema and fashion would appeal to readers interested in the cultural implications of the decade and its emerging trickle up mechanisms that allowed consumers to transform themselves into active participants in the construction of the modern fashion system. -- Alicia Mihalic * The Journal of Dress History *

Eugenia Paulicelli is Professor of Italian, Comparative Literature, and Women's Studies at Queens College and The Graduate Center, City University of New York. She is author of Writing Fashion in Early Modern Italy: From Sprezzatura to Satire; Fashion is a Serious Business: Rosa Genoni, Milan Expo 1906 and The Great War, and Italian Style: Fashion & Film from Early Cinema to the Digital Age. Louise Wallenberg is Associate Professor in Film and Fashion Studies and former director of The Centre for Fashion Studies at Stockholm University. She is co-editor of Nordic Fashion Studies and has published extensively on film and fashion. Drake Stutesman teaches theoretical approaches to film costume design at New York University, where she co-organizes an annual conference on film costume. She is editor of the cinema and media journal Framework.