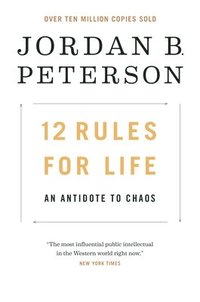 An Antidote to Chaos

av Jordan B Peterson
(38 röster)  |  Läs 8 recensioner
Inbunden Engelska, 2018-01-23
307
Köp
Spara som favorit
Finns även som
Visa alla 6 format & utgåvor
'One of the most important thinkers to emerge on the world stage for many years' SpectatorWhat are the most valuable things that everyone should know? Acclaimed clinical psychologist Jordan Peterson has influenced the modern understanding of personality, and now he has become one of the world's most popular public thinkers, with his lectures on topics from the Bible to romantic relationships to mythology drawing tens of millions of viewers. In an era of unprecedented change and polarizing politics, his frank and refreshing message about the value of individual responsibility and ancient wisdom has resonated around the world.In this book, he provides twelve profound and practical principles for how to live a meaningful life, from setting your house in order before criticising others to comparing yourself to who you were yesterday, not someone else today. Happiness is a pointless goal, he shows us. Instead we must search for meaning, not for its own sake, but as a defence against the suffering that is intrinsic to our existence. Drawing on vivid examples from the author's clinical practice and personal life, cutting edge psychology and philosophy, and lessons from humanity's oldest myths and stories, 12 Rules for Life offers a deeply rewarding antidote to the chaos in our lives: eternal truths applied to our modern problems.
Visa hela texten

Fascinating ... Peterson is brilliant on many subjects -- Bryan Appleyard * The Times * A rock-star academic, a cool, cowboy-boot-wearing public thinker who directs tough love at overprotected youth ... [Peterson] twirls ideas around like a magician -- Melanie Reid * The Times * A wonderful psychologist -- Malcolm Gladwell Jordan Peterson is the most important and influential Canadian thinker since Marshall McLuhan. His bold synthesis of psychology, anthropology, science, politics and comparative religion is forming a genuinely humanistic university of the future -- Camille Paglia Profound, charismatic and serious... One of the most important thinkers to emerge on the world stage for many years ... Peterson has become increasingly difficult to ignore - and whoever chooses to do so will deprive themselves of an intriguing intellectual journey -- Tim Lott * Spectator * A master at helping his students become more reflective, and take themselves and their futures more seriously -- Norman Doidge, author of 'The Brain that Changes Itself' 12 Rules for Life hits home - from identifying the deeply engrained hierarchical ladder that motivates our decision making to asking indispensable and sometimes politically unpopular questions about your life and suggesting ways to better it -- Howard Bloom, author of 'The Lucifer Principle'

Jordan B. Peterson is a Professor of psychology at the University of Toronto. Raised in the frigid wastelands of Northern Alberta, he has flown a hammer-head roll in a carbon-fiber stunt-plane, built a Native American longhouse in his Toronto home, and been inducted into the coastal Pacific Kwakwaka'wakw tribe. He's taught mythology to lawyers, doctors and business people, consulted for the UN Secretary General, helped his clinical clients manage depression, obsessive-compulsive disorder and anxiety, and lectured extensively in North America and Europe. With his students and colleagues, Dr. Peterson has published over a hundred scientific papers, and his book Maps of Meaning revolutionized the psychology of religion. Formerly a professor at Harvard University, he was nominated for its prestigious Levenson Teaching Prize.