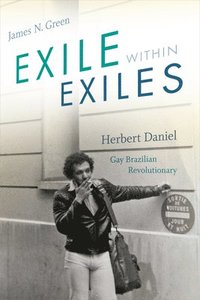 av James N Green
Häftad Engelska, 2018-10-19
249
Köp
Spara som favorit
Skickas inom 7-10 vardagar.
Fri frakt inom Sverige för privatpersoner.
Finns även som
Visa alla 2 format & utgåvor
Herbert Daniel was a significant and complex figure in Brazilian leftist revolutionary politics and social activism from the mid-1960s until his death in 1992. As a medical student, he joined a revolutionary guerrilla organization but was forced to conceal his sexual identity from his comrades, a situation Daniel described as internal exile. After a government crackdown, he spent much of the 1970s in Europe, where his political self-education continued. He returned to Brazil in 1981, becoming engaged in electoral politics and social activism to champion gay rights, feminism, and environmental justice, achieving global recognition for fighting discrimination against those with HIV/AIDS. In Exile within Exiles, James N. Green paints a full and dynamic portrait of Daniel's deep commitment to leftist politics, using Daniel's personal and political experiences to investigate the opposition to Brazil's military dictatorship, the left's construction of a revolutionary masculinity, and the challenge that the transition to democracy posed to radical movements. Green positions Daniel as a vital bridge linking former revolutionaries to the new social movements, engendering productive dialogue between divergent perspectives in his writings and activism.
Visa hela texten

"A magni?cent and moving biography that tells a larger story about resistance to authoritarian rule, the struggle for democracy, and the assertion of gay subjectivity in modern Brazil." -- Christopher Dunn * Journal of Iberian and Latin American Research * "James Green has produced a pathbreaking portrait that combines compelling biography with critical historiographical contributions." -- Benjamin A. Cowan * HAHR * "Exile within Exiles seamlessly merges the particulars of Daniel's life with the broader context of repression and mobilization in authoritarian Brazil, the cultural milieu and restrictions of Brazilian society, and the grassroots mobilization in Brazil's transition to democracy. The result is a compelling life-and-times biography." -- Colin M. Snider * Canadian Journal of Latin American and Caribbean Studies * "Exile within Exiles is a refreshing addition to a growing genre that explores the intersection of public and private spheres, both in the lives of historical figures as well as in the creation of political movements." -- Larissa Pires * H-LatAm, H-Net Reviews * "James N. Green captures the life of an extraordinary figure in late twentieth-century Brazil and does so with great detail and sensitivity. . . . Beautifully researched and realized, Exile Within Exiles is the story, not only of a man, but a movement. Its apt title is the perfect metaphor for a gay man whose sexuality was not widely accepted by the movement that was so close to his heart." -- John Francis Leonard * A&U Magazine * "Exile within Exiles is an elegiac homage to Herbert Daniel. . . . James N. Green artfully brings to life the history of a man on the margins who defied easy categorization. . . . In the process, Green presents an innovative approach to grasping the imbrications of sexuality and politics in modern Latin American history." -- Patrick William Kelly * Middle Atlantic Review of Latin American Studies * "Exile Within Exiles speaks to Daniel's personal struggle not just against the Brazilian dictatorship but also the left's construction of revolutionary masculinity - as well as his ultimate losing battle against AIDS. Green positions Daniel as a link between a more violently intolerant past and a progressive movement that seeks dialog and results." -- Donald Padgett * HIV Plus Mag *

James N. Green is Carlos Manuel de Cespedes Professor of Latin American History at Brown University and the author of several books, including We Cannot Remain Silent: Opposition to the Brazilian Military Dictatorship in the United States, also published by Duke University Press.