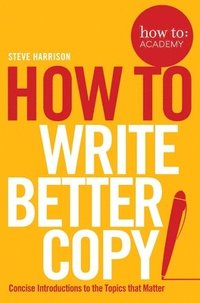 How To Write Better Copy

Advice on Getting People to Notice Your Copy, Engage with it and Do What You Want Them to Do

av Steve Harrison
Häftad Engelska, 2016-09-08
89
Köp
Spara som favorit
Kan levereras innan julafton!
Whether you're an agency writer in need of inspiration, a one-woman-band drumming up work from new clients, an established business trying to get more from that mysterious thing called 'content', or you simply want to persuade your colleagues to adopt your point of view, How To Write better Copy by Steve Harrison will help you write better copy. It starts with the thinking before the writing, and how to create the all-important Brief. Then it takes you step-by-step from how to write a headline to how to get the response you want from your reader. With examples at every stage, and explanations based on both the author's twenty-five years' experience and recent scientific research, this book will help hone your skills - whether you're writing websites or press ads, e-zines or direct mail, brochures or blogs, posters or landing pages, emails or white papers.
Visa hela texten

Steve Harrison was European Creative Director (OgilvyOne) and Global Creative Director (Wunderman) either side of starting his own agency, HTW. At HTW, he won more Cannes Lions in his discipline than any creative director in the world. That discipline was direct marketing, which means his copy was judged not by how clever it was but by how many things it sold. When he left agency life, Campaign magazine described him as 'the greatest direct marketing creative of his generation'. Steve's work appears in The D&AD Copy Book, which features the world's top 50 copywriters of the past 50 years. His How to Do Better Creative Work became the most expensive advertising book of all time when it traded on Amazon.co.uk at GBP3,854 a copy. It is published in English, Mandarin, Spanish and Italian.