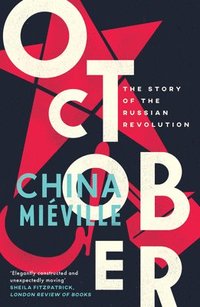 The Story of the Russian Revolution

av China Mieville
Häftad Engelska, 2018-05-22
117
Köp
Spara som favorit
Finns även som
Visa alla 3 format & utgåvor
In February of 1917 Russia was a backward, autocratic monarchy, mired in an unpopular war; by October, after not one but two revolutions, it had become the world's first workers' state, straining to be at the vanguard of global revolution. How did this unimaginable transformation take place? In a panoramic sweep, stretching from St Petersburg and Moscow to the remotest villages of a sprawling empire, Mieville uncovers the catastrophes, intrigues and inspirations of 1917, in all their passion, drama and strangeness. Intervening in long-standing historical debates, but told with the reader new to the topic especially in mind, here is a breathtaking story of humanity at its greatest and most desperate; of a turning point for civilisation that still resonates loudly today. China Mieville tells the extraordinary story of this pivotal moment in history.
Visa hela texten

"Mieville is an ideal guide through this complex historical moment, giving agency to obscure and better-known participants alike, and depicting the revolution as both a tragically lost opportunity and an ongoing source of inspiration." --Publishers Weekly (Starred Review) "When one of the most marvellously original writers in the world takes on one of the most explosive events in history, the result can only be incendiary." --Barbara Ehrenreich "To give a new generation of readers a fresh account of the great revolution, incorporating all the post-1989 archival discoveries and scholarly research, is a singularly daunting task. To render it in vivid, oracular prose, moving across the pages with the gathering force of a hurricane, is something that only China Mieville could achieve." --Mike Davis "Mieville sifts through the extraordinary disagreements, debates, and debacles that accompanied the Russian reds on every step of the road to revolution ... He's especially evocative when he chronicles the scenes on the chaotic streets. But much of the value of October comes in his mastery of how the intricacies of human decision-making play out in Petrograd, Moscow, and beyond." --Christian Science Monitor "Elegantly constructed and unexpectedly moving." --Sheila Fitzpatrick, London Review of Books "There are delightful grace notes here over and above a brisk and perceptive narrative." --Stuart Kelly, Scotsman "This gripping account is a re-enactment of the Russian Revolution... His writing can be as passionate as that of the poets of the time: Alexander Blok, Mikhail Kuzmin, Marina Tsvetaeva, to mention some of those quoted here. Mieville's own special effects are of a piece with them." --Financial Times "Cinematic and vivid." --Newsweek An exciting account of the revolutionary moment ... well-argued and elegiac." --Spectator "An intriguing march to revolution, told here with clarity and insight." --Kirkus "Readers will be satisfied that October gives them the literary equivalent of bearing witness to world history." --Booklist "It's as if John Reed, author of the classic piece of revolutionary journalism, Ten Days That Shook the World, woke from a decades-long sleep to tell the story of 1917 once again." --Counterpunch "Best Summer Books of 2017" --Publishers Weekly Further praise for China Mieville: "China Mieville is dazzling ... you can only marvel at the suppleness of his imagination, the inventiveness of his language." --New York Times "Mieville's wit dazzles, his humour is lively, and the pure vitality of his imagination is astonishing." --Ursula K. Le Guin "A writer ... from whom one should expect anything except the ordinary." --Guardian Mieville's account of the events of 1917 in Petrograd is fast-paced, well-written, and eminently readable. In Mieville's telling the Russian revolution of exactly a century ago comes alive. This is the book's primary accomplishement: to recreate the atmosphere of the time trhough a dramatic retelling of osme of the events." - Grover Furr, Socialism and Democracy "China Mieville's October writes an accurate history of the Russian Revolution almost as if it was science fiction - like an alternate history that actually happened, which is how it strikes us now - and achieves a vivid depiction of a gigantic social upheaval without losing sight of agency and decision at every level of the process." -- Ken MacLeod

China Mieville is the multi-award-winning author of many works of fiction and non-fiction. His fiction includes The City and the City, Embassytown and This Census-Taker, and has won the Hugo, World Fantasy and Arthur C. Clarke Awards. His non-fiction includes London's Overthrow and Between Equal Rights. He has written for various publications, including the New York Times, Guardian, and Granta, and is a founding editor of the quarterly Salvage.