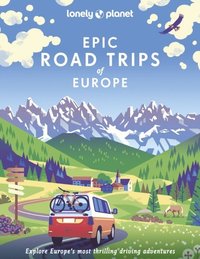 av Lonely Planet
Inbunden Engelska, 2022-08-12
311
Köp
Spara som favorit
Buckle up for the next installment in our Epic series and the follow-up to Epic Drives of the World. Showcasing 50 of Europe's greatest road trips, from classic drives such as Route Napoleon through the south of France to longer trips including Ireland's Wild Atlantic Way or taking a campervan through Finnish Lapland in the Arctic summer. We cover a huge variety of themes and experiences across drives that range from a few hours to a week or more. Each of the featured drives include: First-person accounts from writers who have completed the drive Challenge level grading: easy / harder / epic Inspirational photography, maps and practical information to follow the writer's journey Driving factbox: when is the best time to drive, vehicle hire information, how to get there, what to take Expert travel advice: where to stay, recommended detours, the best places to eat Suggestions for similar drives 50 epic drives across Europe, including: Coast to the Edge of Alps (Albania) Grossglockner Hachalpenstrasse (Austria) Bulgaria's fortress highway: Plovdiv to Veliko Tarnovo (Bulgaria) The Adriatic Highway (Croatia) Central and Southern Bohemia Loop (Czech Republic) West Coast of Jutland (Denmark) The Cotswolds (England) Chateaux of the Loire Valley (France) To the Nurburgring (Germany) Iceland's Ring Road (Iceland) Wild Atlantic Way (Ireland) Dolomites Passes & Villages Loop (Italy) The Belfast Loop (Northern Ireland) West Coast - Bergen to Kristiansund (Norway) Portugal's National Route 2 (Portugal) EV Campervan Around Orkney (Scotland) Mallorca - Serra de Tramuntana (Spain) Furka Pass (Switzerland) The Coastal Way (Wales) With a vibrant cover illustrated by Ross Murray, this beautiful hardback continues this collectible series. Whether you're a regular road tripper or just want to explore your destination in a new way, Epic Road Trips of Europe will inspire a lifetime of adventures out on the open road. About Lonely Planet: Lonely Planet is a leading travel media company, providing both inspiring and trustworthy information for every kind of traveller since 1973. Over the past four decades, we've printed over 145 million guidebooks and phrasebooks for 120 languages, and grown a dedicated, passionate global community of travellers. You'll also find our content online, and in mobile apps, videos, 14 languages, armchair and lifestyle books, ebooks, and more, enabling you to explore every day. 'Lonely Planet guides are, quite simply, like no other.' - New York Times 'Lonely Planet. It's on everyone's bookshelves; it's in every traveller's hands. It's on mobile phones. It's on the Internet. It's everywhere, and it's telling entire generations of people how to travel the world.' - Fairfax Media (Australia)
Visa hela texten