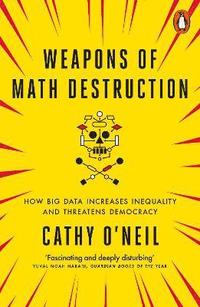 av Cathy O'Neil
(2 röster)
Häftad Engelska, 2017-07-06
109
Köp
Spara som favorit
Finns även som
Visa alla 3 format & utgåvor
'A manual for the 21st-century citizen... accessible, refreshingly critical, relevant and urgent' - Financial Times 'Fascinating and deeply disturbing' - Yuval Noah Harari, Guardian Books of the Year In this New York Times bestseller, Cathy O'Neil, one of the first champions of algorithmic accountability, sounds an alarm on the mathematical models that pervade modern life -- and threaten to rip apart our social fabric. We live in the age of the algorithm. Increasingly, the decisions that affect our lives - where we go to school, whether we get a loan, how much we pay for insurance - are being made not by humans, but by mathematical models. In theory, this should lead to greater fairness: everyone is judged according to the same rules, and bias is eliminated. And yet, as Cathy O'Neil reveals in this urgent and necessary book, the opposite is true. The models being used today are opaque, unregulated, and incontestable, even when they're wrong. Most troubling, they reinforce discrimination. Tracing the arc of a person's life, O'Neil exposes the black box models that shape our future, both as individuals and as a society. These "weapons of math destruction" score teachers and students, sort CVs, grant or deny loans, evaluate workers, target voters, and monitor our health. O'Neil calls on modellers to take more responsibility for their algorithms and on policy makers to regulate their use. But in the end, it's up to us to become more savvy about the models that govern our lives. This important book empowers us to ask the tough questions, uncover the truth, and demand change.
Visa hela texten

Fascinating and deeply disturbing -- Yuval Noah Harari * Guardian Books of the Year * This is a manual for the 21st-century citizen, and it succeeds where other big data accounts have failed - it is accessible, refreshingly critical and feels relevant and urgent -- Federica Cocco * Financial Times * Well-written, entertaining and very valuable -- Danny Dorling * Times Higher Education * O'Neil has become a whistle-blower for the world of Big Data... Her work makes particularly disturbing points about how being on the wrong side of an algorithmic decision can snowball in incredibly destructive ways * Time * Cathy O'Neil has seen Big Data from the inside, and the picture isn't pretty. Weapons of Math Destruction opens the curtain on algorithms that exploit people and distort the truth while posing as neutral mathematical tools. This book is wise, fierce, and desperately necessary -- Jordan Ellenberg, author of How Not To Be Wrong Weapons of Math Destruction is a fantastic, plainspoken call to arms. Cathy O'Neil's book is important precisely because she believes in data science. It's a vital crash course in why we must interrogate the systems around us and demand better -- Cory Doctorow, author of Little Brother and co-editor of Boing Boing Often we don't even know where to look for those important algorithms, because by definition the most dangerous ones are also the most secretive. That's why the catalogue of case studies in O'Neil's book are so important; she's telling us where to look * Guardian * In today's world, if you want to change your fate you've got to pray at the altar of the algorithm... As math guru Cathy O'Neil argues in her newest book, these models are just the latest way America's institutions perpetuate bias and prejudice to reward the rich and keep the poor, well, poor. It's a nuanced reminder that big data is only as good as the people wielding it * Wired * Not math heavy, but written in an exceedingly accessible, almost literary style; her fascinating case studies of WMDs fit neatly into the genre of dystopian literature. There's a little Philip K. Dick, a little Orwell, a little Kafka in her portrait of powerful bureaucracies ceding control of the most intimate decisions of our lives to hyper-empowered computer models riddled with all of our unresolved, atavistic human biases -- Chris Jackson * Paris Review * O'Neil is an ideal person to write this book... She is one of the strongest voices speaking out for limiting the ways we allow algorithms to influence our lives and against the notion that an algorithm, because it is implemented by an unemotional machine, cannot perpetrate bias or injustice... While Weapons of Math Destruction is full of hard truths and grim statistics, it is also accessible and even entertaining. O'Neil's writing is direct and easy to read - I devoured it in an afternoon -- Evelyn Lamb * Scientific American *

Cathy O'Neil is the author of the bestselling Weapons of Math Destruction, which won the Euler Book Prize and was longlisted for the National Book Award. She received her PhD in mathematics from Harvard and has worked in finance, tech, and academia. She launched the Lede Program for data journalism at Columbia University and recently founded ORCAA, an algorithmic auditing company. O'Neil is a regular contributor to Bloomberg View.