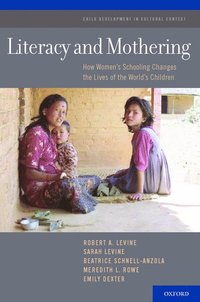 How Women's Schooling Changes the Lives of the World's Children

av Robert A Levine
Inbunden Engelska, 2012-03-01
779
Köp
Spara som favorit
Skickas inom 7-10 vardagar.
Fri frakt inom Sverige för privatpersoner.
Finns även som
Visa alla 2 format & utgåvor
Women's schooling is strongly related to child survival and other outcomes beneficial to children throughout the developing world, but the reasons behind this correlation have been unclear. In Literacy and Mothering, the authors show, for the first time, how communicative change plays a key role: Girls acquire academic literacy skills, even in low-quality schools, which enable them, as mothers, to understand public health messages in the mass media and to navigate
bureaucratic health services effectively, reducing risks to their children's health. Assessments of these maternal skills in four diverse countries - Mexico, Nepal, Venezuela, and Zambia - support this model and are presented in the book.
Visa hela texten

PsyCritiques My conclusion is unmitigated praise for the research and development of theory represented in Literacy and Mothering. It is a book that provides a solid foundation for answering important questions about how literacy is affecting the children of the world... It is densely packed with information and has much to offer anyone who cares about having a measurable impact on the future health of women and children.

<br>Robert A. LeVine is the Roy E. Larsen Professor of Education and Human Development, Emeritus, at Harvard University, where he directed the Project on Maternal Schooling that informs this book. His previous books include Anthropology and Child Development: A Cross-Cultural Reader (2008, with Rebecca S. New) and Child Care and Culture: Lessons from Africa (1994, with Sarah LeVine and others). In 2001 he received the Award for Distinguished Contributions to Educational Research from the American Educational Research Association. <br>Sarah LeVine is an anthropologist who has conducted research on four continents and coordinated the fieldwork of the Project on Maternal Schooling. Her books include Dolor y Alegr a: Women and Social Change in Urban Mexico (1993) and The Saint of Kathmandu (2008). <br>Beatrice Schnell-Anzola is a specialist in bilingual language and literacy assessment who received her Ed.D. at the Harvard Graduate School of Education. She joined the Project on Maternal Schooling in 1992, developed its literacy assessment program, and led its Venezuela study. Her articles have appeared in the International Journal of Educational Development, the Harvard Educational Review, and Social Science and Medicine. <br>Meredith L. Rowe is Assistant Professor of Human Development at the University of Maryland, College Park. She received her doctorate from the Harvard University Graduate School of Education in 2003 and participated in the Project on Maternal Schooling since 1999. Her research focuses on the role of parents and family factors in children's language development, and she has published articles in Science, Child Development, Developmental Psychology, and Developmental Science. <br>Emily Dexter is a developmental psychologist whose research focuses on literacy development, academic achievement gaps, and the role of parents, teachers, and society in children's development. She was a member of the Project on Maternal Schooling while a doctoral student and postdoctoral researcher at the Harvard Graduate School of Education, and designed many of the project's quantitative analyses. Her work has been published in the Comparative Education Review, Elementary School Journal, and School Effectiveness and School Improvement.<br>