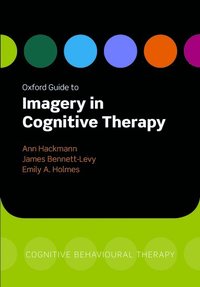 av Ann Hackmann
Häftad Engelska, 2011-05-26
691
Köp
Spara som favorit
Finns även som
Visa alla 2 format & utgåvor
Imagery is one of the new, exciting frontiers in cognitive therapy. This is a landmark book, which will play an important role in the next phase of cognitive therapy's development, as psychologists start to recognise the centrality of imagery in the development, maintenance and treatment of psychological disorders
Visa hela texten

The Journal of Behaviour Change, 2012 This volume is a timely addition to the cognitive therapy field and one which will be consulted for many years to come.

<br>Dr. Ann Hackmann is a clinical psychologist, who has worked for over 20 years in research groups that specialise in the development of cognitive therapy. Currently she is working in a group headed by Professor Mark Williams, studying the effects of Mindfulness Based Cognitive Therapy on depression and other disorders. Previously she worked with a group run by Professors David Clark and Anke Ehlers, developing cognitive therapy protocols for various anxiety disorders. She has worked as a therapist in a large number of randomised controlled trials, and has done research on phenomenology of anxiety disorders and refinement of treatment strategies. <br>Her special interest is in imagery and its relationship to memory in psychopathology, and with Emily Holmes she edited a special edition of Memory (2004) on this topic. She has done studies on treatment of intrusive memories in depression (with Dr, Wheatley and Professor Brewin), and early memories in social phobia (with Dr, Wild and Professor Clark). <br>James Bennett-Levy is Associate Professor in Mental Health at Sydney University's Department of Rural Health (Northern Rivers) in northern New South Wales, Australia. As soon as he was appointed to the position, he saw the potential of low intensity CBT interventions for rural and remote communities, where access to evidence-based psychological therapies tends to be very poor. Recognising the absence of a useful low intensity CBT textbook to guide practitioners and decision makers, he initiated and co-ordinated the Oxford Guide to Low Intensity CBT Interventions. He has co-edited another important clinical text for CBT practitioners: the Oxford Guide to Behavioural Experiments in Cognitive Therapy (Bennett-Levy, Butler, Fennell, Hackmann, Mueller & Westbrook, 2004); and has co-written the Oxford Guide to Imagery in Cognitive Therapy with Ann Hackmann and Emily Holmes. In his research work, he is one of the world's leading researchers on CBT training. <br>Dr Emily A. Holmes is a Clinical Psychologist with a PhD in Cognitive Neuroscience. She is currently a Royal Society Dorothy Hodgkin Fellow and Senior Research Fellow at the University of Oxford's Department of Psychiatry, UK. She is also a clinician, specialised in the treatment of post traumatic stress disorder (PTSD) using cognitive behaviour therapy (CBT). Dr. Holmes is known for her clinical expertise and research in mental imagery - particularly trauma memory, with current work also reaching into depression and bipolar disorder. Dr Holmes' present work in experimental psychopathology seeks to understand cognitive mechanisms underlying distress across psychological disorders. In particular she is interested in the impact of mental imagery on emotional processing, and the impact of processing biases in the way people interpret information. Dr Emily Holmes receives research grant support from the Royal Society, ESRC and Wellcome Trust in the UK. <br>