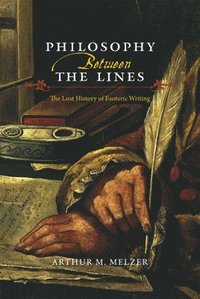 Philosophy Between the Lines

The Lost History of Esoteric Writing

av Arthur M Melzer
Häftad Engelska, 2017-02-27
367
Köp
Spara som favorit
Kan tyvärr inte längre levereras innan julafton.
Finns även som
Visa alla 1 format & utgåvor
Philosophical esotericism the practice of communicating one's unorthodox thoughts "between the lines" was a common practice until the end of the eighteenth century. The famous Encyclopedie of Diderot, for instance, not only discusses this practice in over twenty different articles, but admits to employing it itself. The history of Western thought contains hundreds of such statements by major philosophers testifying to the use of esoteric writing in their own work or others'. Despite this long and well-documented history, however, esotericism is often dismissed today as a rare occurrence. But by ignoring esotericism, we risk cutting ourselves off from a full understanding of Western philosophical thought. Arthur M. Melzer serves as our deeply knowledgeable guide in this capacious and engaging history of philosophical esotericism. Walking readers through both an ancient (Plato) and a modern (Machiavelli) esoteric work, he explains what esotericism is and is not. It relies not on secret codes, but simply on a more intensive use of familiar rhetorical techniques like metaphor, irony, and insinuation. Melzer explores the various motives that led thinkers in different times and places to engage in this strange practice, while also exploring the motives that lead more recent thinkers not only to dislike and avoid this practice but to deny its very existence. In the book's final section, "A Beginner's Guide to Esoteric Reading," Melzer turns to how we might once again cultivate the long-forgotten art of reading esoteric works. Philosophy Between the Lines is the first comprehensive, book-length study of the history and theoretical basis of philosophical esotericism, and it provides a crucial guide to how many major writings philosophical, but also theological, political, and literary were composed prior to the nineteenth century.
Visa hela texten

"An intensely researched study. . . . Melzer's work enables us, as though for the first time, to assess the historical reality and philosophical significance of esotericism."--Adrian Blau, King's College, London "Review of Metaphysics" (9/14/2015 12:00:00 AM) "Melzer has provided iron-clad textual evidence for the existence of literally millennia's worth of examples of (his understanding of what counts as) esoteric writing. [He] also encourages the reader to reconsider her hermeneutic framework(s) and makes long, painstaking work paramount. . . . Melzer's book encourages one to read a great deal, and to read and reread slowly and carefully, to pause, to work backwards and forwards in the text in front of us, and ultimately to entertain thoughts that, in the context of our reigning interpretative methods, are usually treated as pariahs."--Adrian Blau, King's College, London "Bryn Mawr Classical Review" (9/14/2015 12:00:00 AM) "Melzer has shown it irrefutably: Philosophers from ancient times to our own have not always said exactly what they meant, and they have not always meant exactly what they said. . . . [An] exceedingly careful and graceful writer, . . . [Melzer has] produced a truly accessible book about esotericism."--Adrian Blau, King's College, London "Jewish Review of Books" (6/25/2015 12:00:00 AM) "Melzer provides an extensive examination of the phenomenon of esoteric writing as it has been practiced through the centuries in the West. . . . This is a landmark scholarly work in the study of the history of political thought. . . . Melzer's book will leave only the most willful in the dark. . . . An outstanding book."--Steven B. Smith, Yale University "Choice" (4/6/2015 12:00:00 AM) "Much can be learned from Melzer. . . . The book calls into question basic assumptions about how we read. Drawing from an expansive canon, it sketches a profound view of the relation between rhetoric and philosophy. Perhaps most importantly, Melzer offers a bracingly clear, sharply argued prolegomenon to Strauss's painstaking and miraculous readings of individual texts-- a fitting anteroom for a bewildering and exhilarating intellectual funhouse."--Tyler Cowen "MAKE Literary Magazine" (12/12/2014 12:00:00 AM) "Those of us introduced to the history of moral and political philosophy by students of Leo Strauss would sometimes ask for evidence backing their claim that the great writers of the past practiced a lost art of esoteric writing. . . . Here Meltzer finally delivers the kind of work we asked for back then. . . . The book does an excellent job collecting the evidence for the existence of philosophic esotericism, . . . amass[ing] an enormous amount of testimony from major figures in every age from Classical Antiquity through the Renaissance and Enlightenment."--Tyler Cowen "Notre Dame Philosophical Reviews" (10/28/2014 12:00:00 AM) The best book I know on esoteric writing and its history.--Tyler Cowen "Marginal Revolution" (10/1/2014 12:00:00 AM) This is a book scholars have needed for a long time. There has been so much more heat than light in the contentious debates about esoteric writing since Leo Strauss tried to reanimate attention to the phenomenon in the 1930s that it is surprising that no one has tried to set out carefully the various aspects of the rhetorical practice and to compile the evidence that it not only existed but was a prominent feature of philosophical writing until the nineteenth century. Melzer has finally done this; lucidly, patiently, and in a graceful conversational style. But he goes much farther. His book is philosophical as well as scholarly. It goes to the issue of late modern self-understanding itself, what we care about and what one might call our collective psychological relationship to the issue. No one even remotely interested in the topic of philosophical writing can afford to i

Arthur M. Melzer is professor of political science at Michigan State University, where he is also cofounder and codirector of the Symposium on Science, Reason, and Modern Democracy. He is the author of The Natural Goodness of Man.