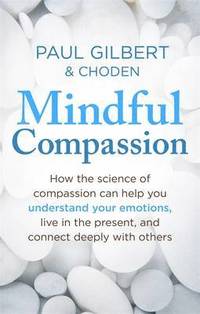 Using the Power of Mindfulness and Compassion to Transform Our Lives

Paul Gilbert (Author) PAUL GILBERT is professor of clinical psychology at the University of Derby and, until his retirement from the NHS in 2016, was consultant clinical psychologist at the Derbyshire Health Care Foundation Trust. He has researched evolutionary approaches to psychopathology for over 40 years with a special focus on the roles of mood, shame and self-criticism in various mental health difficulties for which compassion focused therapy was developed. He has written and edited many books on psychology, therapy, and compassion. He was awarded an OBE by the Queen in March 2011 for services to mental health. Choden (Author) Formally a monk for seven years within the Tibetan Buddhist tradition, CHODEN completed a three year, three month retreat in 1997 and has been a practicing Buddhist since 1985. Born as Sean McGovern, he is originally from South Africa where he trained as a lawyer and learned meditation under the guidance of Rob Nairn, an internationally renowned Buddhist teacher. Choden is now involved in developing secular mindfulness and compassion programmes drawing upon the wisdom and methods of the Buddhist tradition, as well as contemporary insights from psychology and neuroscience. He is an honorary fellow of the University of Aberdeen and teaches on their Postgraduate Study Programme in Mindfulness (MSc) that is the first of its kind to include compassion in its curriculum. He lives on the Isle of Arran.