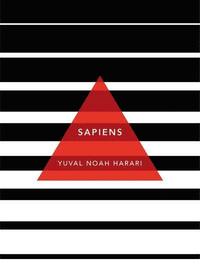 A Brief History of Humankind: (Patterns of Life)

av Yuval Noah Harari
Häftad Engelska, 2019-01-10
176
Köp
Spara som favorit
Yuval Noah Harari's bestselling phenomenon now in a beautifully packaged new special edition. Planet Earth is 4.5 billion years old. In just a fraction of that time, one species among countless others has conquered it. Us. We are the most advanced and most destructive animals ever to have lived. What makes us brilliant? What makes us deadly? What makes us Sapiens? In this bold and provocative book, Yuval Noah Harari explores who we are, how we got here and where we're going. Sapiens is a thrilling account of humankind's extraordinary history - from the Stone Age to the Silicon Age - and our journey from insignificant apes to rulers of the world. 'Unbelievably good. Jaw dropping from the first word to the last' Chris Evans, BBC Radio 2 PATTERNS OF LIFE: SPECIAL EDITIONS OF GROUNDBREAKING SCIENCE BOOKS
Visa hela texten

Sapiens is packed with heretical thinking and surprising facts. This riveting, myth-busting book cannot be summarised in any detail; you will simply have to read it -- John Gray * Financial Times * Here is a simple reason why Sapiens has risen explosively to the ranks of an international best-seller. It tackles the biggest questions of history and of the modern world, and it is written in unforgettably vivid language. You will love it! -- Jared Diamond What's unique about Harari's take is that he focuses on the power of stories and myths to bring people together... I would recommend this book to anyone interested in a fun, engaging look at early human history... Harari tells our history in such an approachable way that you'll have a hard time putting it down -- Bill Gates What makes it so interesting and provocative is that because it's such a condensed sweeping history it talks about some core things that have allowed us to build this extraordinary civilisation that we take for granted, but weren't a given, and it gives you a sense of perspective in how briefly we've been on this Earth -- Barack Obama * CNN * Sapiens is the sort of book that sweeps the cobwebs out of your brain. Its author, Yuval Noah Harari, is a young Israeli academic and an intellectual acrobat whose logical leaps have you gasping with admiration...Harari's writing radiates power and clarity, making the world strange and new -- John Carey * The Sunday Times *

Dr Yuval Noah Harari has a PhD in History from the University of Oxford and now lectures at the Hebrew University of Jerusalem, specialising in World History. Sapiens: A Brief History of Humankind has become an international phenomenon attracting a legion of fans from Bill Gates and Barack Obama to Chris Evans and Jarvis Cocker, and is published in nearly forty languages worldwide. It was a Sunday Times number one bestseller and was in the top ten for over six months in paperback. His follow-up to Sapiens, Homo Deus: A Brief History of Tomorrow was also a top ten bestseller and was described by the Guardian as 'even more readable, even more important, than his excellent Sapiens'.