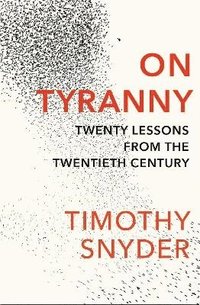 Twenty Lessons from the Twentieth Century

av Timothy Snyder
(11 röster)  |  Läs 4 recensioner
Häftad Engelska, 2017-03-02
114
Köp
Spara som favorit
Finns även som
Visa alla 3 format & utgåvor
**NEW YORK TIMES BESTSELLER** 'A sort of survival book, a sort of symptom-diagnosis manual in terms of losing your democracy and what tyranny and authoritarianism look like up close' Rachel Maddow 'These 128 pages are a brief primer in every important thing we might have learned from the history of the last century, and all that we appear to have forgotten' Observer History does not repeat, but it does instruct. In the twentieth century, European democracies collapsed into fascism, Nazism and communism. These were movements in which a leader or a party claimed to give voice to the people, promised to protect them from global existential threats, and rejected reason in favour of myth. European history shows us that societies can break, democracies can fall, ethics can collapse, and ordinary people can find themselves in unimaginable circumstances. History can familiarise, and it can warn. Today, we are no wiser than the Europeans who saw democracy yield to totalitarianism in the twentieth century. But when the political order seems imperilled, our advantage is that we can learn from their experience to resist the advance of tyranny. Now is a good time to do so.
Visa hela texten

The most coherent manifesto on confronting Trump... powerful. -- Sarah Ditum * New Statesman * Snyder's beautifully weighted book is the perfect clear-eyed antidote to [Trump's] deliberate philistinism ... Always measured in their observation, these 128 pages are a brief primer in every important thing we might have learned from the history of the last century, and all that we appear to have forgotten ... You will read no more relevant field guide to that wisdom than this book. -- Tim Adams * Observer * On Tyranny is a slim book that fits alongside your pocket constitution and feels only slightly less vital... Clarifying and unnerving... a memorable work that is grounded in history yet imbued with the fierce urgency of what now. -- Carlos Lozada * Washington Post * Following paths trodden by Hannah Arendt, Czeslaw Milosz and Vaclav Havel, Snyder has written a manifesto for surviving the political rampages of our time with our rights and freedoms intact... Snyder's book is addressed to the American reader, but its message is broader. Read in Budapest or Warsaw, it will have an especial resonance ... Slim and accessible, On Tyranny is a book to read quickly, ponder slowly and pass on -- Annabelle Chapman * Prospect * Urgent, indignant, winningly ragged in execution, On Tyranny is in the best tradition of polemical pamphlets. Timely agitprop, it offers some relief from Trump anxiety disorder. -- Lewis Jones * Daily Telegraph * A chilling description of how authoritarian mindsets work -- Hillary Clinton Steeped in the history of interwar Germany, Snyder writes with bracing immediacy about how to prevent, or at least forestall, the repression of lives and minds. * Washington Post * We are rapidly ripening for fascism. This American writer leaves us with no illusions about ourselves -- Svetlana Alexievich, winner of the 2015 Nobel Prize for Literature On Tyranny will help you keep going for the next four years, or however long it takes. -- Masha Gessen He is undoubtedly a scholar of great distinction and authority... If more people follow Snyder's injunctions to read newspapers, avoid falling for contrived online "scandals", make friends across national boundaries and remember professional ethics then the world will indeed be a better place. -- Michael Gove * The Times * In an erudite yet accessibly manner, with brevity and precision, Snyder draws on his prodigious knowledge of 20th century despotism to present 20 sobering lessons for dealing with the Trump phenomenon -- Muhammad Idrees Ahmad * National * On Tyranny is [a] response to the rise of Donald Trump, although it is not, strictly speaking, about Trump, who is never mentioned by name. It is, rather, a primer in how to think historically -- Ken Early * The Irish Times * A slim volume more like a guide than a tome of historical scholarship, though Snyder drew on 25 years of research and writing -- Stav Ziv * Newsweek Europe *

Timothy Snyder is Levin Professor of History at Yale University, and has written and edited a number of critically acclaimed and prize-winning books about twentieth-century European history: his most recent book, On Tyranny, was an international bestseller. Previous books include Black Earth, which was longlisted for the Samuel Johnson Prize and won the annual prize of the Dutch Auschwitz Committee; and Bloodlands, which won the Hannah Arendt Prize, the Leipzig Book Prize for European Understanding, the Ralph Waldo Emerson Award in the Humanities and the literature award of the American Academy of Arts and Letters. Snyder is a frequent contributor to the New York Review of Books and the Times Literary Supplement. He is a member of the Committee on Conscience of the United States Holocaust Memorial Museum, a permanent fellow of the Institute for Human Sciences, and sits on the advisory council of the Yivo Institute for Jewish Research.