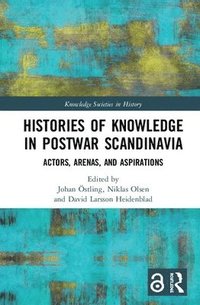 Histories of Knowledge in Postwar Scandinavia

av Johan Oestling, Niklas Olsen, David Larsson Heidenblad
Inbunden Engelska, 2020-06-10
2328
Köp
Spara som favorit
Finns även som
Visa alla 1 format & utgåvor
Histories of Knowledge in Postwar Scandinavia uses case studies to explore how knowledge circulated in the different public arenas that shaped politics, economics and cultural life in and across postwar Scandinavia, particularly in the 1960s and 1970s. This book focuses on a period when the term "knowledge society" was coined and rapidly found traction. In Scandinavia, society's relationship to rational forms of knowledge became vital to the self-understanding and political ambitions of the era. Taking advantage of contemporary discussions about the circulation, arenas, forms, applications and actors of knowledge, contributors examine various forms of knowledge - economic, environmental, humanistic, religious, political, and sexual - that provide insight into the making and functioning of postwar Scandinavian societies and offer innovative studies that contribute to the development of the history of knowledge at large. The concentration on knowledge rather than the welfare state, the Cold War or the new social and political movements, which to date have attracted the lion's share of scholarly attention, ensures the book makes a historiographical intervention in postwar Scandinavian historiography. Offering a stimulating point of departure for those interested in the history of knowledge and the circulation of knowledge, this is a vital resource for students and scholars of postwar Scandinavia that provides fresh perspectives and new methodologies for exploration.
Visa hela texten

Introduction Histories of knowledge in postwar Scandinavia Part 1: The environment and global crises 1. Nuclear fallout as risk: Denmark and the thermonuclear revolution 2. Georg Borgstroem and the population-food dilemma: Reception and consequences in Norwegian public debate, 1950s and 1960s 3. The emergence of environmental journalism in 1960s Sweden: Methodological reflections on working with digitalised newspapers 4. "Revolt from the center": Socio-environmental protest from idea to praxis in Denmark, 1978-1993 Part 2: Economy, politics, and the welfare state 5. The Galbraithian moment: Affluence and critique of growth in Scandinavia, 1958-1972 6. Welfare state criticism as elite criticism in 1970s Denmark 7. The entrepreneur's dream: Credit card history between PR and academic research 8. State feminism revisited as lieux de savoir: Fabrics of the Scandinavian knowledge society, c. 1960-1980 Part 3: Education, culture, and the humanities 9. The city, the church, and the 1960s: On secularisation theory and the Swedish translation of Harvey Cox's The Secular City 10. Sex education and the state: Norwegian schools as arenas of knowledge in the 1970s 11. Mobilising the outsider: Crises and histories of the humanities in the 1970s Scandinavian welfare states 12. Revolting against the established book market: Book cafes as key actors within the counterpublic of the Scandinavian New Left Epilogue Scandinavia: A Corporatist Model of Knowledge?