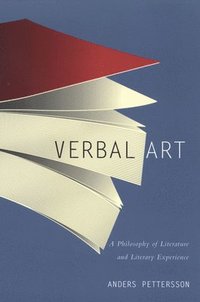 A Philosophy of Literature and Literary Experience

av Anders Pettersson
Häftad Engelska, 2001-04-01
381
Köp
Spara som favorit
Finns även som
Visa alla 2 format & utgåvor
Pettersson demonstrates the implications and applications of the theory through a series of detailed studies of literary works, taking care to show that his theory is compatible with a broad variety of perspectives. Combining an intimate knowledge of modern literary theory and the aesthetics of literature with innovative applications of linguistics and cognitive psychology to the literary work, he provides a thorough treatment of fundamental problems in the area, including the concept of a text or work, the concept of form, and the distinctiveness of the literary use of language.
Visa hela texten

"Verbal Art makes a significant contribution to the theory of literature. Pettersson's detailed account of literary communication is presented with a large dose of good sense and is usefully integrated with excellent examples and discussion of a number of important issues in the philosophy of literature such as those concerning the cognitive value of literature, the inexhaustibility of literary meaning, emotional reactions to fictional works, and the autonomy of the literary work. He introduces into literary theory a more empirically sound scientific perspective then those often appealed to in the discipline, such as Freudian, Marxist, structuralist, and semiotic perspectives." Robert Stecker, Department of Philosophy, Central Michigan University "An ambitious book that makes a worthwhile contribution to philosophy of literature/literary theory. Pettersson presents a sustained and persuasive argument for an important and, nowadays, frequently neglected position." James O. Young, Department of Philosophy, University of Victoria