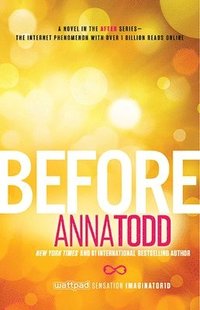 av Anna Todd
(14 röster)
Häftad Engelska, 2015-12-08
121
Köp
Spara som favorit
Finns även som
Visa alla 2 format & utgåvor
Book 5 of the After series-Anna Todd's Wattpad fan fiction that racked up 1 billion reads online and captivated romance readers across the globe! Before explores Hardin Scott's life before Tessa, reveals what happens after After, and gives new insights on their turbulent #Hessa romance. Cosmopolitan called Anna Todd "the biggest literary phenomenon of her generation." That's Normal declared Hardin and Tessa "The Mr. Darcy and Lizzy Bennet of our time." Revel in the awesome, messy power of true love. BEFORE Hardin met Tessa he was a raging storm. DURING those first moments they met, he realized he needed to keep her for himself-his life depended on it. AFTER they got together, the world would never be the same. Hardin and Tessa's dramatic love affair became a vortex pulling in everyone around them. For the first time these others are given voice as they appear before, during, and after the events in original After novels. Alongside them, Hardin's account of his first encounters with Tessa-which will change what you thought you knew about the brooding boy and the angel who loved him.
Visa hela texten

Anna Todd is the New York Times bestselling author of the After series. Always an avid reader, Todd began writing stories on her phone through Wattpad, the reading and writing multiplatform for original stories, with After becoming its most-read series with over two billion reads. She has been hailed by Cosmopolitan as "the biggest literary phenomenon of her generation." The print edition of After was published in 2014 and has since been released in over thirty-five languages with more than twelve million copies sold worldwide. After is a #1 bestseller in countries across the globe including Italy, Germany, France, and Spain. Since the release of After, Todd has gone on to write eight additional novels and served as producer and screenwriter on the film adaptations of After and After We Collided. A native of Ohio, Anna, her husband, and son currently live in Seattle. Find her at AnnaTodd.com, on Twitter at @AnnaTodd, on Instagram at @AnnaTodd, and on Wattpad as Imaginator1D.