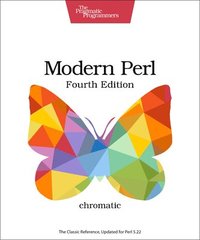 av Chromatic
(1 röst)
Häftad Engelska, 2015-11-17
229
Köp
Spara som favorit
A Perl expert can solve a problem in a few lines of well-tested code. Now you can unlock these powers for yourself. Modern Perl teaches you how Perl really works. It's the only book that explains Perl thoroughly, from its philosophical roots to the pragmatic decisions that help you solve real problems--and keep them solved. You'll understand how the language fits together and discover the secrets used by the global Perl community. This beloved guide is now completely updated for Perl 5.22. When you have to solve a problem now, reach for Perl. When you have to solve a problem right, reach for Modern Perl. Discover how to scale your skills from one-liners to asynchronous Unicode-aware web services and everything in between. Modern Perl will take you from novice to proficient Perl hacker. You'll see which features of modern Perl will make you more productive, and which features of this well-loved language are best left in the past. Along the way, you'll take advantage of Perl to write well-tested, clear, maintainable code that evolves with you.Learn how the language works, how to take advantage of the CPAN's immense trove of time-tested solutions, and how to write clear, concise, powerful code that runs everywhere. Specific coverage explains how to use Moose, how to write testable code, and how to deploy and maintain real-world Perl applications. This new edition covers the new features of Perl 5.20 and Perl 5.22, including all the new operators, standard library changes, bug and security fixes, and productivity enhancements. It gives you what you need to use the most up-to-date Perl most effectively, all day, every day. What You Need: Perl 5.16 or newer (Perl 5.20 or 5.22 preferred). Installation/upgrade instructions included.
Visa hela texten

Since 1998, chromatic has helped kick off the Perl testing revolution; contributed to the PerlMonks community from its origins; and wrote, edited, and reviewed many books and articles. He's contributed to Perl's current release structure, as well as Moose, Catalyst, Mojolicious, and p5p. He first released Modern Perl to the community in 2010.