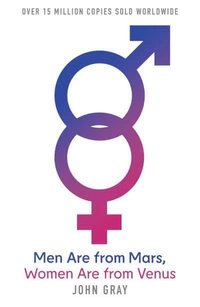 Format
Häftad (Paperback / softback)
Språk
Engelska
Antal sidor
320
Utgivningsdatum
2002-11-01
Upplaga
25th Anniversary edition
Förlag
Harper Thorsons
Volymtitel
Men Are from Mars, Women Are from Venus AND How to Get What You Want in Your Relationships
Dimensioner
200 x 135 x 20 mm
Vikt

av John Gray
(1 röst)
Häftad Engelska, 2002-11-01
109
Köp
Spara som favorit
Finns i lager! Skickas inom 1-2 vardagar.
Fri frakt inom Sverige över 159 kr för privatpersoner.
The legendary relationships guide that mothers recommend to their daughters, friends give as gifts and brothers steal from their sisters, MEN ARE FROM MARS AND WOMEN ARE FROM VENUS is inarguably the definitive book on having a happy relationship. `A treasure', `a bible' and `an heirloom' are some of the words used to describe the book that has saved countless relationships and improved innumerable others. Now repackaged to relate to a new generation of readers, this phenomenal book continues to carry its legacy of understanding and trust into the world. Since its first publication, over a staggering 15 million copies of MEN ARE FROM MARS, WOMEN ARE FROM VENUS have sold globally to single men and women looking for guidance on how to find the perfect partner, married couples seeking to strengthen their bond, and divorcees hoping to fathom where it all went wrong. Gray's insights into how to allow your other half to "pull away" like an elastic band, prevent your emotional baggage from polluting your current relationship, and translate the phrases of the opposite sex are as relevant now as when they were first published. With straightforward, honest writing from that precious male perspective, Gray unlocks the secrets hidden in your partner's words and actions to enable you both to reach true mutual understanding and a lifetime of love. Discover for yourself why thousands believe that MEN ARE FROM MARS, WOMEN ARE FROM VENUS should be mandatory reading for everyone.
Visa hela texten

"Devoted readers praise Mr. Gray as the saviour of their marriages and his book as the brick that finally knocks some sense into their mates" Washington Times "When I was 21 and freshly dumped by Harry, my first really grown-up boyfriend, where did I turn but John Gray's Men Are From Mars, Women Are From Venus? It was reassuring to know the reason I'd been dumped wasn't because I was rubbish in bed" New Woman "Men Are From Mars and Women Are From Venus has shed light on countless relationship problems, offering an explanation for many social inequalities...a hot topic of debate in households and offices throughout the world" Eastern Daily Press

John Gray Ph.D. is recognised internationally as a leading authority on communication and relationships. He is a psychologist, writer, lecturer and bestselling author who has been conducting seminars in major cities for over twenty years. Gray lives in northern California with his wife Bonnie.