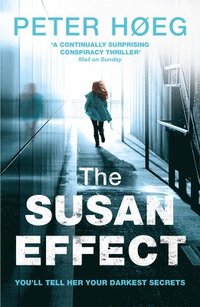 av Peter Hoeg
Häftad Engelska, 2018-05-03
104
Köp
Spara som favorit
You'll tell her your darkest secrets Susan Svendsen has an unusual talent. She is an expert in finding out secrets. People feel compelled to confide in her and unwittingly confess their innermost thoughts. Her whole life, she has exploited this talent, but now her family is in jeopardy and there is a prison sentence hanging over her head. Then Susan gets a timely offer from a former government official: use her power one more time and have all charges dropped. But there are some powerful people determined to stop her.
Visa hela texten

An artfully written, exuberant thriller with a mercurial and interesting central character -- Barry Forshaw * Guardian * It's a rare treat to read a book by the far-from-prolific Danish author Peter Hoeg. . . His latest novel is an offbeat futuristic thriller. . . the challenges Hoeg sets his readers are well worth taking on * Express * A well-tuned and clever femi-thriller. * Politiken * A continually surprising conspiracy thriller. -- THRILLER OF THE WEEK * The Mail on Sunday * Peter Hoeg is back. And better. And with a novel that is both a thriller, a social critique, and existentially provoking - and on top of that, wonderful and funny. * Dagbladenes Bureau *

Peter Hoeg (Author) Peter Hoeg was born in 1957 and followed various callings - dancer, actor, fencer, sailor, mountaineer - before he turned seriously to writing. He published his first novel, The History of Danish Dreams, in 1988, and was called 'the foremost writer of his generation' by Information magazine. His crime novel Miss Smilla's Feeling for Snow received universal acclaim and was an international bestseller. Martin Aitken (Translator) Martin Aitken's translations of Scandinavian literature number some 35 books. His work has appeared on the shortlists of the International DUBLIN Literary Award (2017) and the U.S. National Book Awards (2018), as well as the 2021 International Booker Prize. He received the PEN America Translation Prize in 2019.