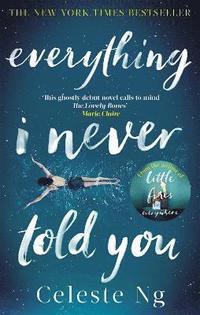 Everything I Never Told You

av Celeste Ng
Häftad Engelska, 2014-11-11
139
Köp
Spara som favorit
Skickas inom 7-10 vardagar.
Fri frakt inom Sverige över 159 kr för privatpersoner.
Finns även som
Visa alla 6 format & utgåvor
'There is much here that might impress Pulitzer and Man Booker judges...Ng brilliantly depicts the destruction that parents can inflict on their children and on each other' Mark Lawson, Guardian Lydia is the favourite child of Marilyn and James Lee; a girl who inherited her mother's bright blue eyes and her father's jet-black hair. Her parents are determined that Lydia will fulfill the dreams they were unable to pursue - in Marilyn's case that her daughter become a doctor rather than a homemaker, in James's case that Lydia be popular at school, a girl with a busy social life and the centre of every party. But Lydia is under pressures that have nothing to do with growing up in 1970s small town Ohio. Her father is an American born of first-generation Chinese immigrants, and his ethnicity, and hers, make them conspicuous in any setting. When Lydia's body is found in the local lake, James is consumed by guilt and sets out on a reckless path that may destroy his marriage. Marilyn, devastated and vengeful, is determined to make someone accountable, no matter what the cost. Lydia's older brother, Nathan, is convinced that local bad boy Jack is somehow involved. But it's the youngest in the family - Hannah - who observes far more than anyone realises and who may be the only one who knows what really happened. And if you loved Everything I Never Told You, don't miss Celeste Ng's second novel Little Fires Eveywhere What readers are saying: 'Devastating...A truly tragic but devastatingly well written book' 'Ng is a true craftsman. I implore you to read this. Also my favourite ending of a novel so far this year' 'This is the best book I have read this year' 'Really enjoyed this book, deeply moving, sad and thought provoking'
Visa hela texten

The mysterious circumstances of 16-year-old Lydia Lee's tragic death have her loved ones wondering how, exactly, she spent her free time. This ghostly debut novel calls to mind The Lovely Bones * Marie Claire * [A] moving tale... of daughters for whom cultural disconnect is but the first challenge * Vogue * I couldn't stop reading Everything I Never Told You . . . the writing is so smooth and keenly observed. The portrait of each member of the Lee family, the exploration of their mixed-race issues and the search for the killer of their sister and daughter, Lydia, pulled at my heartstrings to the very end -- Uwem Akpan, #1 New York Times bestselling author of Say You're One of Them Ng moves gracefully back and forth in time, into the aftermath of the tragedy as well as the distant past, and into the consciousness of each member of the family, creating a series of mysteries and revelations that lead back to the original question: what happened to Lydia? . . . Ng is masterful in her use of the omniscient narrator, achieving both a historical distance and visceral intimacy with each character's struggles and failures . . . On the surface, Ng's storylines are nothing new. There is a mysterious death, a family pulled apart by misunderstanding and grief, a struggle to fit into the norms of society, yet in the weaving of these threads she creates a work of ambitious complexity. In the end, this novel movingly portrays the burden of difference at a time when difference had no cultural value . . . Compelling * Los Angeles Review of Books * Wonderfully moving . . . Emotionally precise . . . A beautifully crafted study of dysfunction and grief...[This book] will resonate with anyone who has ever had a family drama * Boston Globe * Ng expertly explores and exposes the Lee family's secrets... These long-hidden, quietly explosive truths, weighted by issues of race and gender, slowly bubble to the surface of Ng's sensitive, absorbing novel and reverberate long after its final page. Ng's emotionally complex debut novel sucks you in like a strong current and holds you fast until its final secrets surface * Kirkus * [A] moving tale . . . of daughters for whom cultural disconnect is but the first challenge * Vogue * Cleverly crafted, emotionally perceptive . . . Ng sensitively dramatizes issues of gender and race that lie at the heart of the story . . . Ng's themes of assimilation are themselves deftly interlaced into a taut tale of ever deepening and quickening suspense * O, The Oprah Magazine * A powerhouse of a debut novel, a literary mystery crafted out of shimmering prose and precise, painful observation about racial barriers, the burden of familial expectations, and the basic human thirst for belonging... Ng's novel grips readers from page one with the hope of unraveling the mystery behind Lydia's death-and boy does it deliver, on every front * Huffington Post * Excellent . . . an accomplished debut . . . heart-wrenching . . . Ng deftly pulls together the strands of this complex, multigenerational novel. Everything I Never Told You is an engaging work that casts a powerful light on the secrets that have kept an American family together-and that finally end up tearing it apart * Los Angeles Times * Ng constructs a mesmerizing narrative that shrinks enormous issues of race, prejudice, identity, and gender into the miniaturist dynamics of a single family. A breathtaking triumph, reminiscent of prophetic debuts by Ha Jin, Chang-rae Lee, and Chimamanda Adichie, whose first titles matured into spectacular, continuing literary legacies * Library Journal, starred review * If we know this story, we haven't seen it yet in American fiction, not until now... Ng has set two tasks in this novel's doubled heart-to be exciting, and to tell a story bigger than whatever is behind the crime. She does both by turning the nest of familial resentments into at least four smaller, prickly mysteries full of secrets the family members won't share... What emerges is

Celeste Ng grew up in Pittsburgh, Pennsylvania, and Shaker Heights, Ohio. She attended Harvard University and earned an MFA from the University of Michigan. Her debut novel, Everything I Never Told You, won the Hopwood Award, the Massachusetts Book Award, the Asian/Pacific American Award for Literature, and the American Library Association's Alex Award. She is a 2016 National Endowment for the Arts Fellow, and she lives in Cambridge, Massachusetts.