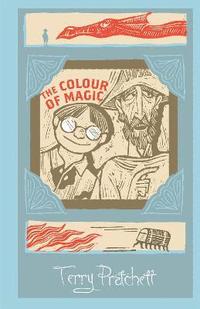 The Colour of Magic

av Terry Pratchett
(2 röster)
Inbunden Engelska, 2014-08-07
159
Köp
Spara som favorit
On a world supported on the back of a giant turtle (sex unknown), a gleeful, explosive, wickedly eccentric expedition sets out. There's an avaricious but inept wizard, a naive tourist whose luggage moves on hundreds of dear little legs, dragons who only exist if you believe in them, and of course THE EDGE of the planet...
Visa hela texten

One of the best, and one of the funniest English authors alive - INDEPENDENT

Sir Terry Pratchett was the acclaimed creator of the global bestselling Discworld series, the first of which, The Colour of Magic, was published in 1983. In all, he was the author of over fifty bestselling books which have sold over 100 million copies worldwide. His novels have been widely adapted for stage and screen, and he was the winner of multiple prizes, including the Carnegie Medal. He was awarded a knighthood for services to literature in 2009, although he always wryly maintained that his greatest service to literature was avoiding writing any. www.terrypratchettbooks.com