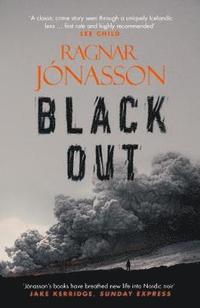 av Ragnar Jonasson
(2 röster)
Häftad Engelska, 2016-07-15
107
Köp
Spara som favorit
Finns även som
Visa alla 3 format & utgåvor
On the shores of a tranquil fjord in Northern Iceland, a man is brutally beaten to death on a bright summer's night. As the 24-hour light of the arctic summer is transformed into darkness by an ash cloud from a recent volcanic eruption, a young reporter leaves Reykajvik to investigate on her own, unaware that an innocent person's life hangs in the balance. Ari Thor Arason and his colleagues on the tiny police force in Siglufjoerdur struggle with an increasingly perplexing case, while their own serious personal problems push them to the limit. As silent, unspoken horrors from the past threaten them all, and the darkness deepens, it's a race against time to find the killer before someone else dies... Dark, terrifying and complex, Blackout is an exceptional, atmospheric thriller from one of Iceland's finest crime writers. `Jonasson's books have breathed new life into Nordic Noir' Jake Kerridge, Sunday Express `A distinctive blend of Nordic Noir and Golden Age detective fiction ... economical and evocative prose, as well as some masterful prestidigitation' Laura Wilson, Guardian `Jonasson's writing is a masterful reinvention of the Golden Age classic style, both contemporary and timeless ... enclosed by the poetic beauty of the location' Crime Review `A classic crime story seen through a uniquely Icelandic lens ... first rate and highly recommended' Lee Child 'A modern take on an Agatha Christie-style mystery, as twisty as any slalom...' Ian Rankin
Visa hela texten

Icelandic crime writer Ragnar Jonasson was born in Reykjavik, and currently works as a lawyer, while teacher copyright law at the Reykjavik University Law School. In the past, he's worked in TV and radio, including as a news reporter for the Icelandic National Broadcasting Service. Before embarking on a writing career, Ragnar translated fourteen Agatha Christie novels into Icelandic, and has had several short stories published in German, English and Icelandic literary magazines. Ragnar set up the first overseas chapter of the CWA (Crime Writers' Association) in Reykjavik, and is co-founder of the International crime-writing festival Iceland Noir. Ragnar's debut thriller, Snowblind became an almost instant bestseller when it was published in June 2015 with Nightblind (winner of the Dead Good Reads Most Captivating Crime in Translation Award) and then Blackout and Rupture following soon after. To date, Ragnar Jonasson has written five novels in the Dark Iceland series, which has been optioned for TV by On the Corner. He lives in Reykjavik with his wife and two daughters. Visit him on Twitter @ragnarjo or at ragnarjonasson.com