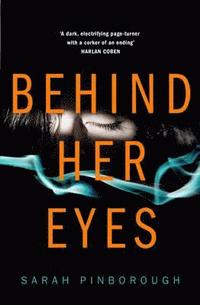 av Sarah Pinborough
(1 röst)
Häftad Engelska, 2017-09-07
126
Köp
Spara som favorit
Finns även som
Visa alla 1 format & utgåvor
Don't miss the brand new twisty thriller from Sarah Pinborough - INSOMNIA - available to buy now! Don't Trust This Book Don't Trust These People Don't Trust Yourself And whatever you do, DON'T give away that ending... ***Now a major new Netflix series*** Louise Since her husband walked out, Louise has made her son her world, supporting them both with her part-time job. But all that changes when she meets... David Young, successful and charming - Louise cannot believe a man like him would look at her twice let alone be attracted to her. But that all comes to a grinding halt when she meets his wife... Adele Beautiful, elegant and sweet - Louise's new friend seems perfect in every way. As she becomes obsessed by this flawless couple, entangled in the intricate web of their marriage, they each, in turn, reach out to her. But only when she gets to know them both does she begin to see the cracks... Is David really the man she thought she knew and is Adele as vulnerable as she appears? Just what terrible secrets are they both hiding and how far will they go to keep them? 'Bloody brilliant' Stephen King 'Piledriver domestic thriller with pull-the-rug-out ending' Ian Rankin (on Twitter) 'A dark, electrifying page-turner with a corker of an ending' Harlan Coben 'This year's must-read thriller' Evening Standard 'The most unsettling thriller of the year... Read it now before someone spoils the ending for you' John Connolly 'Everyone will be talking about this book' Stylist 'Masterful writing that crackles with tension, before detonating that ending' Angela Clarke 'One of the best endings to a book' Prima 'Just when you think you've nailed it, Pinborough pulls the rug out from underneath you' Sam Baker 'The ending's a shocker that makes you want to read the novel all over again' Woman and Home
Visa hela texten

'Bloody Brilliant' Stephen King 'Piledriver domestic thriller with pull-the-rug-out ending' Ian Rankin (on Twitter) 'A dark, electrifying page-turner with a corker of an ending' Harlan Coben 'Original and compelling, the very definition of a page-turner' Sun 'This year's biggest new thriller' Metro 'You'll never guess the ending ... everyone will be talking about this book' Stylist 'The most unsettling thriller of the year ... read it now before someone spoils the ending for you' John Connolly 'This could be your thriller of the year' Daily Mail

Sarah Pinborough is a New York Times bestselling and Sunday Times Number one and Internationally bestselling author who is published in over 30 territories worldwide. Having published more than 25 novels across various genres, her recent books include Behind Her Eyes, now a smash hit Netflix limited series, Dead To Her, now in development with Amazon Studios, and 13 Minutes and The Death House in development with Compelling Pictures. Sarah was the 2009 winner of the British Fantasy Award for Best Short Story and also the 2010 and 2014 winner of the British Fantasy Award for Best Novella, and she has four times been short-listed for Best Novel and was shortlisted for the British Book Award for best Thriller. Sarah lives in the historic town of Stony Stratford, the home of the Cock and Bull story, with her dog Ted. You can follow her on Twitter @sarahpinborough