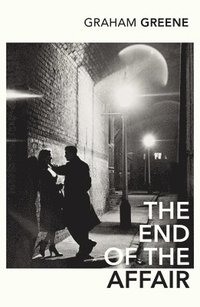 The End of the Affair

av Graham Greene
(1 röst)
Häftad Engelska, 2004-10-01
98
Köp
Spara som favorit
Finns även som
Visa alla 4 format & utgåvor
WITH AN INTRODUCTION BY MONICA ALI The love affair between Maurice Bendrix and Sarah, flourishing in the turbulent times of the London Blitz, ends when she suddenly and without explanation breaks it off. After a chance meeting rekindles his love and jealousy two years later, Bendrix hires a private detective to follow Sarah, and slowly his love for her turns into an obsession.
Visa hela texten

Singularly beautiful and moving -- Evelyn Waugh One of the most true and moving novels of my time, in anybody's language * William Faulkner * In a class by himself...the ultimate chronicler of twentieth-century man's consciousness and anxiety -- William Golding Devastating study of the collision of different kinds of faith, betrayal and commitment * The Times * Greene's novel of illicit love captures perfectly the atmosphere of rainy wartime London - try to read this in one sitting if you can * Express *

Graham Greene was born in 1904. He worked as a journalist and critic, and in 1940 became literary editor of the Spectator. He was later employed by the Foreign Office. As well as his many novels, Graham Greene wrote several collections of short stories, four travel books, six plays, three books of autobiography, two of biography and four books for children. He also wrote hundreds of essays, and film and book reviews. Graham Greene was a member of the Order of Merit and a Companion of Honour. He died in April 1991. Monica Ali was born in Dhaka, Bangladesh, and grew up in England. She is the author of Untold Story, In The Kitchen, Alentejo Blue and her first novel, Brick Lane was shortlisted for the Booker Prize, the George Orwell Prize for political writing and the prestigious Commonwealth Writers' Prize. She lives in London with her husband and two children.