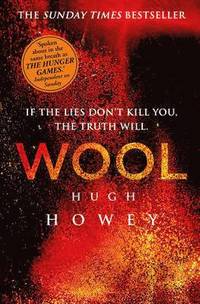 av Hugh Howey
(12 röster)  |  Läs 1 recension
Häftad Engelska, 2013-04-25
107
Köp
Spara som favorit
Finns även som
Visa alla 5 format & utgåvor
SOON TO BE A MAJOR APPLE TV SERIES __________________________ 'Thrilling, thought-provoking and memorable ... one of dystopian fiction's masterpieces alongside the likes of 1984 and Brave New World.' DAILY EXPRESS In a ruined and hostile landscape, in a future few have been unlucky enough to survive, a community exists in a giant underground silo. Inside, men and women live an enclosed life full of rules and regulations, of secrets and lies. To live, you must follow the rules. But some don't. These are the dangerous ones; these are the people who dare to hope and dream, and who infect others with their optimism. Their punishment is simple and deadly. They are allowed outside. Jules is one of these people. She may well be the last. __________________________ 'The next Hunger Games' SUNDAY TIMES 'Well written, tense, and immensely satisfying, Wool will be considered a classic for many years in the future.' WIRED 'Howey's Wool is an epic feat of imagination. You will live in this world.' JUSTIN CRONIN 'Wool is frightening, fascinating, and addictive. In one word, terrific.' KATHY REICHS
Visa hela texten

Wool is ace and YAY it's a trilogy. * Stuff magazine * I picked the serious up after the publication of Wool and Shift, and found myself counting the days until Dust came out in October. * Observer * A thrilling sci-fi novel, equally adept at world-building, pulling the rug out from under its readers, and commenting in classic sci-fi fashion on our own present day. * The Slate * Spoken about in the same breath as The Hunger Games and The Passage. * Independent on Sunday * Howey can really write ... frightening, intriguing, and mysterious ... it's easy to see why Wool captured readers so quickly. * Guardian * The massive underground hit ... Just don't read it in the dark. * Sunday Telegraph * Frightening yet completely believable ... I can't wait to see how Howey develops Wool into his prequel and sequel. * Sunday Express * Exhilarating, intense, addictive. A novel you will never forget. * SJ Watson, author of Before I Go to Sleep * A small and zippy vehicle with impressive narrative force...[Howey's] plot twists like a thrashing serpent in a fisherman's net. * Sunday Business Post * With Wool Hugh Howey has created a new science fiction classic! The riveting storyline and detailed prose sucks you in immediately and makes you feel like you're right there in the silo with his characters. But unlike them, you'll be in no hurry to leave. * Ernie Cline, bestselling author of Ready Player One * The characters are well-drawn, and even the villains have a sympathetic side. Secrets unfold with just the right pacing, and I had to set the book down several times and say, 'Wow,' when a major twist was revealed ... If you're looking for a good read, you can't do much better than Wool. * Rick Riordan, #1 New York Times bestselling author * In Wool, Hugh Howey delivers the key elements of great science fiction: an authentic and detailed future-world; realistic, relatable characters to live in it; and a taut, thoughtful story. Howey's supple, muscular writing is the icing on the cake. * Jonathan Hayes, author of Precious Blood * Written in a warm style that never attempts to get too clever, this is the kind of terrific read that's both respectful towards and transcendent of its own genre. * Sydney Morning Herald * The other reason to have an early night. A must-read. * Glamour * If I read anything better in 2013 in any genre I'll be very, very surprised. * Rick O'Shea * Wool is incredible ... the best science fiction series I've read in years. * Douglas Preston * Perhaps the biggest commercial hit so far to have started life as a self-published e-book. * A N Wilson, Reader's Digest * A compulsive, accessible journey into a sharply realised and well-crafter dystopian world. * SFX * A warm old-fashioned sort of yarn * The Sunday Times * I took a chance on Wool, and found myself engrossed. * Huffington Post * This is one of those rare occasions where not only does the book live up to the hype, it exceeds it. * Bit the Book Blog, Australia * One of the most hotly-anticipated books of 2013. * Irish Times * Thrilling, thought-provoking and memorable ... one of dystopian fiction's masterpieces alongside the likes of 1984 and Brave New World. * Daily Express * Wool started life as a skilful, bleak, short story. Its premise and the dexterity with which Howey pulled it off drew him readers from outside the genre. * Culture, Sunday Times * It's been a long time since I enjoyed a book as much as this. * Joanne Harris *

Hugh Howey spent eight years living on boats and working as a yacht captain for the rich and famous. It wasn't until the love of his life carried him away from these vagabond ways that he began to pursue literary adventures, rather than literal ones. Hugh wrote and self-published his first young adult novel, Molly Fyde and the Parsona Rescue. The Molly Fyde series won rave reviews and praise from readers but it was the release of Wool that made his career take off. Hugh lives in Jupiter, Florida with his wife Amber and their dog Bella.