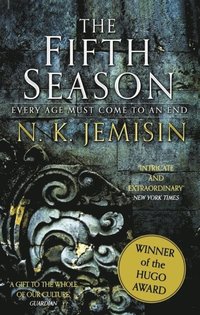 The Broken Earth, Book 1, WINNER OF THE HUGO AWARD

av N K Jemisin
(9 röster)  |  Läs 1 recension
Häftad Engelska, 2016-07-26
109
Köp
Spara som favorit
Skickas inom 7-10 vardagar.
Fri frakt inom Sverige över 159 kr för privatpersoner.
Finns även som
Visa alla 1 format & utgåvor
Winner of the 2016 Hugo Award for Best Novel Book 1 in the record-breaking triple Hugo-Award-winning trilogy ***A New York Times Notable Book*** ***Shortlisted for the World Fantasy, Nebula, Kitschies, Audie and Locus Awards*** ***The inaugural Wired.com book club pick*** THIS IS THE WAY THE WORLD ENDS . . . FOR THE LAST TIME. IT STARTS WITH THE GREAT RED RIFT across the heart of the world's sole continent, spewing ash that blots out the sun. IT STARTS WITH DEATH, with a murdered son and a missing daughter. IT STARTS WITH BETRAYAL, and long dormant wounds rising up to fester. This is the Stillness, a land long familiar with catastrophe, where the power of the earth is wielded as a weapon. And where there is no mercy. 'Astounding' NPR 'Amazing' Ann Leckie 'Breaks uncharted ground' Library Journal 'Powerful' io9 'Elegiac, complex, and intriguing' Publishers Weekly 'Intricate and extraordinary' New York Times 'Brilliant' Washington Post The Broken Earth trilogy is complete - beginning with The Fifth Season, continuing in The Obelisk Gate (Winner of the 2017 Hugo Award for Best Novel) and concluding with The Stone Sky (Winner of the 2018 Hugo Award for Best Novel and 2018 Nebula Award).
Visa hela texten

Heartbreaking, wholly unexpected, and technically virtuosic, THE FIFTH SEASON is a tour-de-force. I felt every shock--and the book is packed with them--in my marrow. It's no exaggeration to say that Jemisin expands the range of what great fantasy can be -- Brian Staveley Fantasy novels often provide a degree of escapism: a good thing, for any reader who has something worth escaping. Too often, though, that escape comes through a fictional world that erases rather than solves the more complex problems of our own... In Jemisin's work, nature is not unchangeable or inevitable. The Fifth Season invites us to imagine a dismantling of the earth in both the literal and the metaphorical sense, and suggests the possibility of a richer and more fundamental escape * The New York Times * Jemisin brilliantly illustrates the belief that, yes, imaginative world-building is a vital element of fantasy - but also that every character is a world unto herself * NPR *

N. K. Jemisin is a Brooklyn-based author and the winner of three Hugo Awards for her novels The Fifth Season, The Obelisk Gate and The Stone Sky. She previously won the Locus Award for her first novel, The Hundred Thousand Kingdoms, and her short fiction and novels have been nominated multiple times for Hugo, World Fantasy and Nebula awards, and shortlisted for the Crawford and the James Tiptree, Jr. Awards. She is a science fiction and fantasy reviewer for the New York Times, and you can find her online at nkjemisin.com.