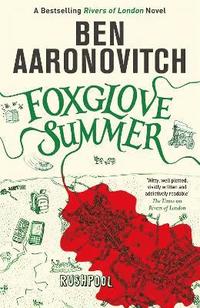 Book 5 in the #1 bestselling Rivers of London series

av Ben Aaronovitch
(2 röster)
Häftad Engelska, 2015-07-09
116
Köp
Spara som favorit
Finns även som
Visa alla 1 format & utgåvor
Book 5 in the Rivers of London series, from Sunday Times Number One bestselling author Ben Aaronovitch. In the fifth of his bestselling series Ben Aaronovitch takes Peter Grant out of whatever comfort zone he might have found and takes him out of London - to a small village in Herefordshire where the local police are reluctant to admit that there might be a supernatural element to the disappearance of some local children. But while you can take the London copper out of London, you can't take the London out of the copper. Travelling west with Beverley Brook, Peter soon finds himself caught up in a deep mystery and having to tackle local cops and local gods. And what's more, all the shops are closed by 4pm... Praise for the Rivers of London novels: 'Ben Aaronovitch has created a wonderful world full of mystery, magic and fantastic characters. I love being there more than the real London' NICK FROST 'As brilliant and funny as ever' THE SUN 'Charming, witty, exciting' THE INDEPENDENT 'An incredibly fast-moving magical joyride for grown-ups' THE TIMES Discover why this incredible series has sold over two million copies around the world. If you're a fan of Terry Pratchett or Douglas Adams - don't panic - you will love Ben Aaronovitch's imaginative, irreverent and all-round irresistible novels.
Visa hela texten

It's a real treat - Hot Fuzz meets Harry potter via hardboiled police procedural - with a compelling cast of characters and a nail-biting mystery to be solved * Living North * This is a book that I can't recommend enough - as I said before, it's a great jump on point for new readers, but it also keeps up the greatness of the previous four novels. Whilst this might be my favourite since the first novel, that doesn't mean the others are rubbish - this just has a little something extra, a little je ne sais pas. * The Cult Den * As brilliant and funny as ever * THE SUN * Ben has deservedly earned high praise for his Rivers of London series and Foxglove Summer continues to broaden the saga with gusto. With plenty of dark humour and action, great characters - human and otherwise! - this latest novel more than delivers everything fans will expect from a new story in this brilliant series. Thoroughly recommended * Down the Tubes * An incredibly fast-moving magical joyride for grown-ups * THE TIMES * Foxglove Summer is evocative, mysterious, engaging, and, mostly, enormous amounts of fun. Fans of the Peter Grant series will not be disappointed, and those new to the books should start with Rivers in London, safe in the knowledge that the sequels are just as good. * Starburst Magazine * Foxglove Summer is urban fantasy the way it should be. The kind of book that keeps you up way past 3.00 am because you really need to 'read to the end of this chapter' and then the next ... and the next... Foxglove Summer is well paced and engrossing. You do not have to have read the previous four volumes as it stands on its own well enough, though having the history at hand is always going to help. A fun read and thoroughly recommended. * Piper at the Gates of Fantasy * this little country retreat offers much in a way of a fresh, singular plot to devour with some real police action and adventure... it's a witty installment * Sci-Fi Now * I loved this story. This is a series where the announcement of a new book fills me with joy. * Geek Syndicate * As we'd expect, each fan is going to have their favourite and this book is definitely one of mine * The Book Bag * The story itself is intriguing with a solid mystery at its heart and it rattles along at a steady pace, whilst still allowing Peter time to enjoy the country life. It's certainly a refreshing new angle to take as the other books are set in the city. This is a great, gritty and whimsical read. 5/5 stars * Book Shelf Butterfly * Highly entertaining * Sunday Express * Funny and wildly inventive * Mail on Sunday * Masterfully crafted ... gives the late, great Terry Pratchett a run for his money * The Sun * Ben Aaronovitch has created a wonderful world full of mystery, magic and fantastic characters. I love being there even more than the real London * Nick Frost * Charming, witty, exciting * Independent * An incredibly fast-moving magical joyride for grown-ups * The Times * For all the murder and mayhem, this is a darkly comic read with characters you can't help but like. * THE SUNDAY EXPRESS *

Before becoming a bestselling author, Ben Aaronovitch was a screenwriter for Doctor Who and a bookseller at Waterstones. He now writes full time, and every book in his Rivers of London series has been a Sunday Times Top Ten bestseller. He is published in 14 languages and has sold more than 2 million copies around the world. Aaronovitch is also a trustee on the board of Cityread London and is a long-time supporter of Nigeria's premiere arts and cultural festival, The Ake Festival. He still lives in London, the city he likes to refer to as 'the capital of the world'.