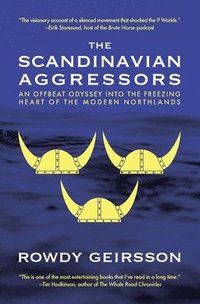 Along the way he meets modern viking luminaries such as Trond "Troll-Breath" Trondsen, who successfully raided a historic monastery's gift shop in England; Bjrn Svensson, who habitually recited classic rock lyrics at the site of each of his infamous berserkings; and Ingrid Trnblom, who founded an elite warrior sisterhood that drew comparisons to the Spartans of ancient Greece, the Samurai of feudal Japan, and perhaps most flattering of all, the Jedi Knights of the Intergalactic Republic. Encounters with additional Neo-Norse individuals augment the journey, revealing long-hidden details about the slaying of a creepy troll in Beowulf's homeland, the brewing of craft beer from within pagan burial mounds, and the suffering of horrendous digestive problems amidst the breathtaking natural beauty of Iceland's remarkable landscape.

Topical, informative, and highly insightful, The Scandinavian Aggressors not only provides essential reading for anyone with even a remote interest in the Modern Viking Movement, but also spins a darn good yard about the fragility of the Scandinavian condition.
Visa hela texten

"rowdy geirsson reaches out like a draugr from a barrow to pull your leg down a rabbit hole full of plausible but preposterous lunatics and doomed sailors in this very funny neo-faux saga. if you're the type of armchair traveler who would rather carry a drinking horn than the Hitchhiker's Guide-recommended towel, read The Scandinavian Aggressors and follow Geirsson to the land of the midnight sun, troll snot liquor, decapitated mermaids, and doofus viking warriors."

-corwin ericson, author of Swell and Checked Out OK

"an outrageously norse-sensical shaggy dog story. rowdy geirsson is a cross between loki and the venerable bede."

"funny as hell! kind of like Rolling Stone for the lfablt crowd."

-scott oden, author of A Gathering of Ravens and Twilight of the Gods

"i had a very good, and by good i mean weird but in a good way, time reading rowdy's travel guide to parallel scandinavia. it's as if early louis theroux was making a documentary about almost, but not quite, somewhat entirely successful modern vikings while the authors of Illuminatus! nodded in approval and now I need to lie down. Also, beer."

-bjrn larssen, author of Children and Why Odin Drinks

"not only is rowdy's writing superb, but the book delivers on its promise, providing a colorful and entertaining look into the life of a man searching for something more and finding it-maybe-in the cold north of modern day scandinavia. this book was a stand out for me. i loved its creativity, its storytelling, its stick-in-your-craw characters, and its ability to make me laugh...if you love vikings and offbeat humor, and aren't afraid to stretch your imagination, you should give it a try."

"the scandinavian aggressors is the visionary account of a silenced movement that shocked the nine worlds. a thoroughly scandifuturistic chronicle of neo-norse extravaganza, so burlesque and baudrillardian that you will thoroughly doubt your own sanity by the end of it. rowdy's most shocking exposition of boreal apocrypha yet."

"as a big fan of norse mythology and viking history, i found rowdy's book as comfortable as an old bathory t-shirt and as surprising as a perverted troll. mermaid beheadings, enslaved leprechauns, and other unstable tales of mead-soaked adventure await! i had a grin from ear to ear reading this whole damn thing."

-matt smith, creator of Barbarian Lord and illustrator of Hellboy: The Bones of Giants

"in the satirical tradition of more's Utopia and Swift's Gulliver's Tr...

ROWDY GEIRSSON is the editor of Norse Mythology for Bostonians: A Transcription of the Impudent Edda and a regular contributor to Metal Sucks and McSweeney's. His writing has also appeared in Scandinavian Review and the Sons of Norway's Viking Magazine.

stories of blood feud and kin-slaying

burning down the doll's house

welcome to the mead hall

enslavement of the wee folk

self-condemned in the tunnelbana

the sacking of almedalsveckan

the acquisition of the man-servants

the story of jrgen the beer-ghost

drinking with the draugr

the beheading of ariel

the battle of billund

fear and loathing in western sweden