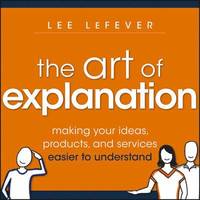 The Art of Explanation

Making your Ideas, Products, and Services Easier to Understand

av Lee Lefever
Häftad Engelska, 2012-11-20
239
Köp
Spara som favorit
Skickas inom 5-8 vardagar.
Gratis frakt inom Sverige över 159 kr för privatpersoner.
Finns även som
Visa alla 2 format & utgåvor
Your guide to becoming an explanation specialist. You've done the hard work. Your product or service works beautifully - but something is missing. People just don't see the big idea - and it's keeping you from being successful. Your idea has an explanation problem. The Art of Explanation is for business people, educators and influencers who want to improve their explanation skills and start solving explanation problems. Author Lee LeFever is the founder of Common Craft, a company known around the world for making complex ideas easy to understand through short animated videos. He is your guide to helping audiences fall in love with your ideas, products or services through better explanations in any medium. You will learn to: * Plan: Learn explanation basics, what causes them to fail and how to diagnose explanation problems. * Package: Using simple elements, create an explanation strategy that builds confidence and motivates your audience. * Present: Produce remarkable explanations with visuals and media. The Art of Explanation is your invitation to become an explanation specialist and see why explanation is now a fundamental skill for professionals.
Visa hela texten

LEE LeFEVER is the Chief Explainer, illustrator, and voice of Common Craft, and is widely credited for inspiring the video explanation industry. Since 2007, the company has won numerous awards and has created explanations for the world's most respected brands, including Intel, Google, Dropbox, and Ford. Its online videos have been viewed more than 50 million times. Today, Common Craft's mission is to make the world a more understandable place to live and work by inspiring and equipping professionals to become explanation specialists. Lee can be found in Seattle, Washington, with his wife and business partner, Sachi, and their dog, Bosco, a fine swimmer.