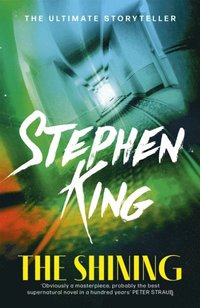 Obviously a masterpiece, probably the best supernatural novel in a hundred yaears

av Stephen King
(6 röster)
Häftad Engelska, 2007-05-01
126
Köp
Spara som favorit
One of the true classics of horror, now with a new stunning cover look. THE SHINING is regarded as one of Stephen King's masterpieces. Danny is only five years old, but in the words of old Mr Hallorann he is a 'shiner', aglow with psychic voltage. When his father becomes caretaker of the Overlook Hotel, Danny's visions grow out of control. As winter closes in and blizzards cut them off, the hotel seems to develop a life of its own. It is meant to be empty. So who is the lady in Room 217 and who are the masked guests going up and down in the elevator? And why do the hedges shaped like animals seem so alive? Somewhere, somehow, there is an evil force in the hotel - and that, too, is beginning to shine . . .
Visa hela texten

STEPHEN KING is the author of more than sixty books, all worldwide bestsellers. His recent titles include The Institute, which was described by the Sunday Express as a 'masterpiece', The Outsider (voted winner of the Goodreads Choice Award for best Mystery and Thriller 2018), and If It Bleeds. Many of his titles have been turned into celebrated films, TV series and streamed events including IT, 'a book which speaks to everybody' (Guardian), The Shawshank Redemption and Stand By Me. King was the recipient of America's prestigious 2014 National Medal of Arts and the 2003 National Book Foundation Medal for Distinguished Contribution to American Letters. In 2007 he also won the Grand Master Award from the Mystery Writers of America. He lives with his wife Tabitha King in Maine.