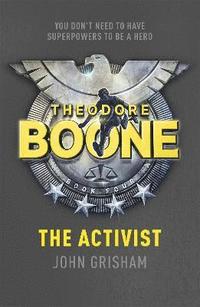 av John Grisham
Häftad Engelska, 2014-03-27
9-12 år
103
Köp
Spara som favorit
Finns även som
Visa alla 1 format & utgåvor
'Best book ever!' - 5-star reader review Theodore Boone, young lawyer, has had a lot to deal with in his thirteen years, everything from kidnapping to murder. But he's come through it all and, with the law on his side, justice has always prevailed. Sometimes, though, the law doesn't seem so just. His friend Hardie Quinn is about to have his family home bulldozed to make way for a bypass. Hardie is not the only one affected: other homes, businesses and schools lie in the path of the road. Theo has to tell his friend the bad news: for once, the law isn't on his side, and there's very little anyone can do to end the destruction. Theo joins the campaign to stop the road. But when he stumbles on a terrible secret about the corrupt men behind the plan - a secret it is illegal for him to know - Theo must figure out how to keep the developers from breaking the law . . . without breaking it himself. ******************* What readers are saying about THEODORE BOONE: THE ACTIVIST 'Fantastic' - 5 stars 'Thoroughly enjoyable' - 5 stars 'This is the best book in the series, a gripping read from the first page to the last' - 5 stars 'Awesome' - 5 stars 'Wonderful' - 5 stars
Visa hela texten

If you aspire to turn your children into lawyers who will keep you in your old age, John Grisham's Theodore Boone, his first novel for young people, might be for you. * <i>Sunday Times</i> * Nobody does legal fiction better. * <i>Daily Express</i> * Not since Nancy Drew has a nosy, crime-obsessed kid been so hard to resist. * <i>The New York Times</i> * Gripping... I would recommend this book to anyone who loves a good mystery. I think everyone will be enthralled by Theodore Boone. * <i>Scholastic News</i> * A master of his craft. * <i>The Guardian</i> *

Beginning with The Firm in 1991, John Grisham has published at least one #1 bestseller every year. His books have been translated into 45 languages and have sold over 350 million copies worldwide. Ten have been adapted to film, including The Firm, The Pelican Brief, and A Time To Kill. His Theodore Boone series for young readers is now in development at Netflix. An avid sports fan, he has written two novels about football, one about baseball, and in 2021 he published Sooley, a story set in the world of college basketball. His lone work of non-fiction, The Innocent Man, was adapted into a six-part Netflix docuseries. He is the two-time winner of the Harper Lee Prize For Legal Fiction and was distinguished with the Library of Congress Creative Achievement Award For Fiction. When he's not writing, he serves on the Board of Directors of the Innocence Project and Centurion Ministries, two national organizations dedicated to exonerating those who have been wrongfully convicted. Much of his recent fiction explores deep-seated problems in our criminal justice systems. A graduate of Mississippi State University and Ole Miss Law School, he lives on a farm in central Virginia, around the corner from the youth baseball complex he built in 1996. He still serves as its Commissioner.