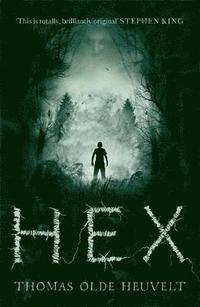 av Thomas Olde Heuvelt
Häftad Engelska, 2016-08-25
128
Köp
Spara som favorit
Finns även som
Visa alla 3 format & utgåvor
The greats of fiction Stephen King and George R. R. Martin lead the fanfare for HEX, so be assured that Thomas Olde Heuvelt's debut English novel is both terrifying and unputdownable in equal measure. Whoever is born here, is doomed to stay until death. Whoever comes to stay, never leaves. Welcome to Black Spring, the seemingly picturesque Hudson Valley town haunted by the Black Rock Witch, a seventeenth-century woman whose eyes and mouth are sewn shut. Blind and silenced, she walks the streets and enters homes at will. She stands next to children's beds for nights on end. So accustomed to her have the townsfolk become that they often forget she's there. Or what a threat she poses. Because if the stitches are ever cut open, the story goes, the whole town will die. The curse must not be allowed to spread. The elders of Black Spring have used high-tech surveillance to quarantine the town. Frustrated with being kept in lockdown, the town's teenagers decide to break the strict regulations and go viral with the haunting. But, in so doing, they send the town spiraling into a dark nightmare.
Visa hela texten

A wicked witch holds an upstate New York town prisoner. This is totally, brilliantly original. -- Stephen King A great writer, the next genre superstar -- Paul Cornell HEX takes the horror/thriller genre to a whole new level. It's deeply unsettling, wholly original, brilliantly written and contains scenes that will haunt you for a long time to come. I dare you to read it. -- Sarah Lotz, author of THE THREE Spielbergian in the way Heuvelt shows supernatural goings-on . . . a fabulous, unforgettable conceit. * Guardian * HEX is reminiscent of vintage Stephen King, and I can think of no higher praise. Chilling, moving and, in its odd way, not a little profound. -- John Connolly A truly terrifying parable about mankind's depravity ... the story is not merely unsettling, it is horrifying ... read it if you dare! * Kirkus Reviews * Olde Heuvelt's HEX sets ancient magic against contemporary technology to create a kind of dark fairy tale that seems ultimately believable in today's world. A terrific debut novel. -- Jeffrey Ford Hidden tensions and human weakness trigger a witch-hunt that boils over into persecution, scapegoating and a shocking denouement. A powerfully spooky piece of writing. * Financial Times * Thomas Olde Heuvelt's HEX is the BEST horror debut since John Ajvide Lindqvist's Let the Right One In. -- Alan Kelly A thoughtful horror story, and one that is all the more chilling for its uncompromising view of humanity . . . HEX is a book that answers the question, "Where does evil come from?" -- Robin Hobb, author of the <i>Farseer Trilogy</i> Thomas Olde Heuvelt's HEX is a treat for all fans of dark fiction . . . a modern spin on the witch's curse story that forces us to take a closer look at ourselves. Who is really evil after all? It's may not be who you think. This is just the beginning and I can't wait to read his next one. -- Ann VanderMeer Olde Heuvelt has written a compelling story rich in imagination and history which is undeniably haunting. Hex is truly absorbing with an easy style of writing that leads you into the world of Black Spring and keeps you locked into the horrifying events as they unfold. * Fantasy Book Review * An entertaining read with a chilling concept. Not for the faint hearted. * Brave New Words * Equal parts Stephen King and The Cabin in the Woods, Thomas Olde Heuvelt's novel is a pop page-turner with an intriguingly weird ambience . . . a funny, surprising and eerie novel. * SFX * A thoughtful and intricately constructed chiller * Sci Fi Now * Thomas is a best-selling author in the Netherlands and about to take the world by storm. Having read Hex, I can confirm that the storm starts here . . . This is one of the scariest books I've read in a long time so I'm not surprised to hear that a big film/TV company is capitalising with a planned series. * Bookbag * The blackness and bleakness of King's PET SEMATARY, and the mix of the supernatural and the everyday that Connolly blends in the Charlie Parker novels . . . There haven't been many novels over the years that I've not wanted to read just before bedtime - but Hex is quite definitely one of them, and in some ways that's the best recommendation I can give it. * Sci-Fi Bulletin * [HEX] was originally published in Dutch, but he has rewritten it very successfully for its American setting. Yet it keeps a touch of strangeness, of alienness . . . He has written five novels already, and publishers should be lining up to translate them. * Wall Street Journal * HEX is creepy and gripping and original, sure to be one of the top horror novels of 2016 -- George R. R. Martin

Dutch novelist Thomas Olde Heuvelt is the author of five novels and many short stories of the fantastic. He has been awarded the Paul Harland Prize on three occasions, and was nominated for the World Fantasy Award. In 2015 he won the Hugo award for Best Short Story. Olde Heuvelt wrote his debut novel at the age of sixteen. He studied English Language and American Literature in his hometown of Nijmegen and at the University of Ottawa in Canada. HEX is Olde Heuvelt's worldwide debut. Warner Bros. is currently developing a TV series based on the book.