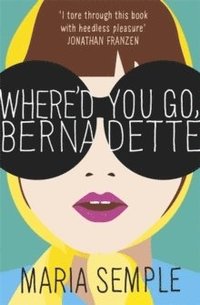 av Maria Semple
Häftad Engelska, 2019-09-17
99
Köp
Spara som favorit
'Like A VISIT FROM THE GOON SQUAD written by Tina Fey' Sam Baker, RED MAGAZINE Shortlisted for the 2013 Women's Prize for Fiction A NEW YORK TIMES bestseller COMING SOON: The film adaptation, directed by Richard Linklater and starring Cate Blanchett, Kristen Wiig and Billy Crudup Bernadette Fox is notorious. To Elgie Branch, a Microsoft wunderkind, she's his hilarious, volatile, talented, troubled wife. To fellow mothers at the school gate, she's a menace. To design experts, she's a revolutionary architect. And to 15-year-old Bee, she is a best friend and, quite simply, mum. Then Bernadette disappears. And Bee must take a trip to the end of the earth to find her. WHERE'D YOU GO, BERNADETTE is a compulsively readable, irresistibly written, deeply touching novel about misplaced genius and a mother and daughter's place in the world.
Visa hela texten

It's intelligent but easy to read; eccentric but never twee. * ELLE UK * I love the extraordinarily well-drawn characters, the plot, the tender, lovely relationship, the humour, and the courage to do daring things -- Nina Stibbe Where'd You Go, Bernadette is a wonderful piece of satire that pinpoints so many of the flaws in our current society. [Semple's] writing is sharp and witty but also incredibly heart-warming. * DOG EAR DISCS * It has had a strong hardback life, it's had some great reviews, now it's got to really capture the masses. I normally don't like books written in emails, journals, notes form, and had not realised this was - just as I hadn't realised Salmon Fishing in the Yemen was! This has the same feel, same contagious look, same wacky scenario (well, not quite), same relentless pull. From page one I was smitten, my dislike for emails forgotten. It is the mother/daughter relationship which is so brilliant, that and the character of Bernadette - a prize-winning architect who doesn't realise that what she needs in life is a new project Clever, witty and hugely satisfying * THE BOOKSELLER * it's a very enjoyable read and the satirical look at modern life * THE BOOKBAG * Laugh-out-loud funny and bitingly satirical * DAILY EXPRESS * a breathtakingly original comedy * ES MAGAZINE * Maria Semple's witty, engaging novel takes the form of a collage of documents, emails, transcripts, liveblogs, FBI reports and magazine articles, all strung together by Bee Branch, a smart and articulate 15-year-old girl, but beneath this surface playfulness is a fascinating story of one woman's retreat from the world...refreshing in its honesty and complexity * THE OBSERVER * a novel full of honesty and heart * CNN * The funniest book I've read in a decade. I laughed to the point of crying on an airplane. My wife thought I'd lost my mind until she read it a few days later. -- John Green * MARIE CLAIRE * an invigorating, hilarious, addictive ride of a novel -- Maggie O'Farrell Local menace, genius architect, recluse, mother: meet Bernadette Fox and her Mensa-level teenage daughter Bea as they travel from silicon valley-Seattle to Antartica and back again. With the kind of sharp, wish-I-wrote-it dialogue you'd expect from a former Saturday Night Live scriptwriter, this is like Tina Fey wrote Welcome to the Goon Squad. I can't say enough about this book, I loved it. -- Sam Baker * HARPERS BAZAAR * Witty and compelling. * THE SUN ON SUNDAY * This fiercely sophisticated novel... whips us around in the maelstrom that is Bernadette Fox: a woman on the edge. * SAINSBURY'S MAGAZINE * full of quirky charm about the mother/daughter bond * GOOD HOUSEKEEPING * This novel, shortlisted for the 2013 Women's Prize for Fiction, uses email correspondence to hilarious and heartbreaking effect. The disappearance of Bernadette Fox drives the engaging plot, with the mother/daughter relationship across geographical divides at its core * METRO * When eccentric ex-architect Bernadette goes AWOL, her 15-year-old daughter, Bee, goes all Sherlock and reads her mum's emails for some answers - and a secret past. Surprisingly, I found myself seriously LOLing too. No wonder it's being turned into a movie! * COMPANY * It is extremely funny, and Semple has a way of combining a technologically savvy, ice-cool wit with a stealthy ability to show gradually a character's warmer side. -- Tom Cox * THE SUNDAY TIMES * This is an extraordinary novel - a fresh, funny, perceptive voice, and an exhilarating read. * GOOD BOOK GUIDE * it's refreshing in its honesty and complexity -- Natasha Tripney * THE OBSERVER * Semple is a TV comedy writer, and the pleasures here are the pleasures of the best American TV: plot, wit and heart. It's refreshing to find a female misunderstood genius at the heart of the book, and a mother-daughter relationship characterised by unadulterated mutual affection. -- Justine Jordan * THE GUARDIAN * compulsively readable comedy... packed with wit, h

Maria Semple spent fifteen years in Los Angeles as a television writer, working on hit shows including ELLEN, SATURDAY NIGHT LIVE, MAD ABOUT YOU and ARRESTED DEVELOPMENT. Her second novel, WHERE'D YOU GO, BERNADETTE, was an international bestseller and was shortlisted for the 2013 Women's Prize for Fiction and won the 2013 Melissa Nathan Award. Maria lives in Seattle. www.mariasemple.com