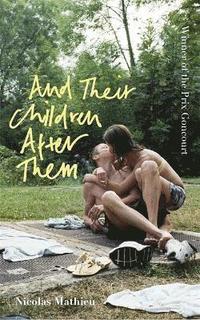 And Their Children After Them

'A page-turner of a novel' New York Times

av Nicolas Mathieu
Inbunden Engelska, 2020-04-02
249
Köp
Spara som favorit
Kan levereras innan julafton!
Finns även som
Visa alla 2 format & utgåvor
'[A] page-turner of a novel . . . I couldn't put the book down' - New York Times 'A multi-viewpoint panorama of thwarted aspirations, spiced with breathy sex scenes and nostalgic detail.' - Mail on Sunday August 1992. Fourteen-year-old Anthony and his cousin decide to steal a canoe to fight their all-consuming boredom on a lazy summer afternoon. Their simple act of defiance will lead to Anthony's first love and his first real summer - that one summer that comes to define everything that follows. Over four sultry summers in the 1990s, Anthony and his friends grow up in a France trapped between nostalgia and decline, decency and rage, desperate to escape their small town, the scarred countryside and grey council estates, in search of a more hopeful future. Nicolas Mathieu's eloquent novel gives a pitch-perfect depiction of teenage angst. Winner of the Prix Goncourt, it won praise for its portrayal of people living on the margins and shines a light on the struggles of French society today. 'Deeply felt . . . An exceptional portrait of youth' - Irish Times
Visa hela texten

Nicolas Mathieu's Goncourt-winning And Their Children After Them, translated by William Rodarmor, winningly wove people, place and time into a lyrical, almost-Lawrentian saga of left-behind France. -- Boyd Tonkin, <i>Spectator</i>, Books of the Year [A] page-turner of a novel . . . I couldn't put the book down * New York Times Book Review * Mathieu won France's prestigious Goncourt prize for this absorbing Nineties narrative set in a French valley community left stranded by the decline of industry . . . a multi-viewpoint panorama of thwarted aspirations, spiced with breathy sex scenes and nostalgic detail * Mail on Sunday * And Their Children After Them . . . finds space too for beauty, for tenderness, for hope . . . you might think of a Ken Loach movie with a soundtrack by Bruce Springsteen . . . an elegiac anthem * Financial Times * The plot, involving drug dealing and simmering violence . . . keeps you turning the pages * Sunday Times * A deeply felt novel, filled with characters that demand the empathy of the reader . . . There are no villains in the book, but there is a deep sense of humanity in all its flaws. It's easy to see why And Their Children After Them won so many awards in its native France. It's an exceptional portrait of youth, ennui and class divide. -- John Boyne * Irish Times * Mathieu captures the vulnerability and awkwardness of adolescence with painful acuity . . . A gritty, expansive coming-of-age novel filled with sex and violence that manages to be tender, even wryly hopeful * Kirkus Reviews * Mathieu's stunning, bittersweet Prix Goncourt-winning English debut . . . will enrapture readers and appeal to fans of Edouard Louis. * Publishers Weekly * Described by this paper's reviewer as "a Ken Loach movie with a soundtrack by Bruce Springsteen", this haunting Prix Goncourt-winning novel is set in a post-industrial town in Lorraine, where the long decommissioned steel mill continues to loom over the inner lives of a younger generation heading falteringly towards adulthood. * Financial Times, Summer Reads * 'A masterly, far-reaching exploration of a de-industrialized country which "treated its families like a minor footnote to society . . . And Their Children After Them invites comparison with the great naturalist and realist writers of the French nineteenth century. * TLS * We've probably all read books and seen movies depicting Paris as the elegant and luxurious City of Light, but for a more nuanced study of the French capital, I would recommend Nicolas Mathieu's And Their Children After Them * The Gloss *

Nicolas Mathieu was born in 1978 in Epinal, a small town in north-eastern France. After studying history and cinema, he moved to Paris, where he worked variously as a scriptwriter, a news editor, a private tutor, and a temp at City Hall. His first novel, Of Fangs and Talons, won the Erckmann-Chatrian prize, the Transfuge prize and the critics' award at the Prix Mystere. His second novel, And Their Children After Them, was published to universal acclaim in 2018 and won various prizes including the most coveted prize in France, the Prix Goncourt. He lives in Nancy.