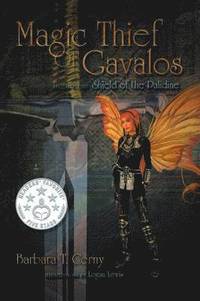 Sequel to the Shield of the Palidine

av Barbara T Cerny
Häftad Engelska, 2015-09-04
189
Köp
Spara som favorit
Skickas inom 10-15 vardagar.
Gratis frakt inom Sverige över 159 kr för privatpersoner.
"Barbara T. Cerny has created a magical world that rivals that of Tolkien's Middle Earth in Shield of the Palidine and its sequel, 'Magic Thief of Gavalos.'" - Melinda Hills, Readers' Favorite Review Seventeen years later, Amorgos once again calls for Pierre and Elise Tonnelier. Amorgos is bereft of magic and Elise, the Redeemer, finds herself reluctantly leading the races to save their world, just as she finds herself trying to save her marriage. Teenagers Elam and Illieya Tonnelier and friend, Chace Bagot, do the one thing they have been told to never do: touch the Sword of the Western Sun. Its portal stone sends them to a world worse than Amorgos; it sends them to Olympus. There they face the gods of Greek mythology and begin a quest to destroy Zeus, the most powerful witch who ever lived. Magic Thief of Gavalos, sequel to Shield of the Palidine, chronicles two incredible journeys: Elise and Pierre on Amorgos, and five years in the lives of Illieya, Elam, and Chace as they battle witches and each other. Both groups must come to terms with themselves and their relationships to save Amorgos, Olympus, and their families. Barbara T. Cerny grew up in Grand Junction, Colorado. She left to garner three college degrees and serve in the U.S. Army. After eight years on active duty and 14 years in the reserves, she retired as a lieutenant colonel in 2007. In 2005, she finally found the real love of her life, writing. The author is an information technology specialist and supervisor for the U.S. Air Force. She lives with her husband, their two teenagers, two needy cats, and two turtles that listen as she discusses plot lines. Author contacts: https://barbaracernybooks.wordpress.com/ https://twitter.com/cernybt http://barbaratcerny.com/Media_Room.html Publisher's website: http://sbpra.com/barbaratcerny
Visa hela texten