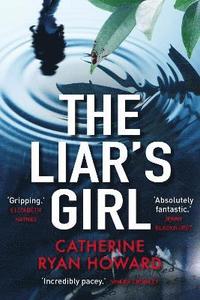 av Catherine Ryan Howard
Häftad Engelska, 2018-03-01
169
Köp
Spara som favorit
Finns även som
Visa alla 2 format & utgåvor
Shortlisted for the Edgar Award, Best Novel 2019 Irish Times' Best Book of the Year, 2018 'Dark, yes, but tender too. The Liar's Girl is tightly plotted and crackles with suspense.' Ali Land, author of Good Me Bad Me 'A killer premise that totally delivers. A creepy, claustrophobic tale that never lets up on the tension while also managing to strike a truly tender note.' Caz Frear, bestselling author of Sweet Little Lies Her first love confessed to five murders. But the truth was so much worse. Dublin's notorious Canal Killer, Will Hurley, is ten years into his life sentence when the body of a young woman is fished out of the Grand Canal. Though detectives suspect they are dealing with a copycat, they turn to Will for help. He claims he has the information the police need, but will only give it to one person - the girl he was dating when he committed his horrific crimes. Alison Smith has spent the last decade abroad, putting her shattered life in Ireland far behind her. But when she gets a request from Dublin imploring her to help prevent another senseless murder, she is pulled back to face the past - and the man - she's worked so hard to forget.
Visa hela texten

Dark, yes, but tender too. The Liar's Girl is tightly plotted and crackles with suspense. * Ali Land, author of Good Me Bad Me * Gripping * Elizabeth Haynes * Incredibly pacey - what lifts Catherine's work above many others in the genre is the quality of her writing and the strength of her characterization. Dublin comes alive in this slice of Irish noir. * Sinead Crowley * It's so hard to stand out in this space right now but The Liar's Girl offers a killer premise that totally delivers. A creepy, claustrophobic tale that never lets up on the tension while also managing to strike a truly tender note. * Caz Frear, bestselling author of Sweet Little Lies * Another thrilling page-turner from a natural born storyteller. * Mark Edwards * [A] clever and intriguing tale ... All the clues were there but so ingeniously hidden that I couldn't figure it out. * Liz Nugent * Absolutely fantastic. I was gripped the entire way through, can't recommend it enough... * Jenny Blackhurst * Catherine Ryan Howard is such a skilled storyteller - every setting was evocative, every hook well-placed, every twist expertly-timed. I flew through it! Astonishingly good. * Jo Spain * A stand-out book... Real and sympathetic characters, a flawlessly-paced plot and a genuinely original premise. I finished it at 2:00am, my heart pounding! * Gillian McAllister * Slick, smart and stylish... Really clever. * Holly Seddon * The Liar's Girl is BRILLIANT. [Catherine Ryan Howard has] outdone herself... It's even better than the Dagger-nominated Distress Signals and that's saying something! -- Michelle Davies The Liar's Girl is heartstoppingly brilliant - a completely convincing, expertly plotted tale. The pace is unrelenting. Catherine Ryan Howard... is an extraordinary talent. * Jane Casey * The Liar's Girl is an incredibly compelling tale of guilt, secrecy and murder. Gripping from the start, Catherine Ryan Howard lures readers in from page one and brings every girl's worst nightmare to life. Unputdownable! * Phoebe Morgan * A haunting thriller... a fast-moving, crackling good novel. * David Bell * I couldn't put it down...an excellent read. * Patricia Gibney * In this second novel, Howard's emerging talent could not be clearer... expertly plotted, with a series of stunning twists. * Daily Mail * Ryan Howard has certainly pulled off, with remarkable confidence, the notoriously difficult task of surpassing a debut novel that was met with critical acclaim and garlanded with awards. * Irish Independent * The Liar's Girl is a tightly structured, highly suspenseful follow-up to Howard's excellent CWA Dagger-nominated debut, Distress Signals. * Irish Times * Fans of crime fiction will love it... Ryan Howard is as good as the early Val McDermid. For those who are always on the lookout for a good new crime writer, look no further. * RTE *

Catherine Ryan Howard's debut novel Distress Signals was published by Corvus in 2016 while she was studying English literature at Trinity College Dublin. It went on to be shortlisted for both the Irish Crime Novel of the Year and the CWA John Creasey/New Blood Dagger. Her second novel, The Liar's Girl, was published to critical acclaim in 2018 and was a finalist for the Mystery Writers of America Edgar Award for Best Novel 2019. That same year, Rewind was shortlisted for the Irish Crime Novel of the Year and was an Irish Times bestseller. She is currently based in Dublin.