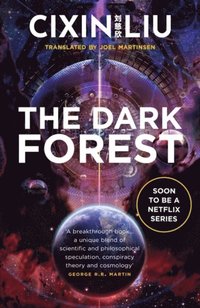 av Cixin Liu
(13 röster)  |  Läs 1 recension
Häftad Engelska, 2016-07-14
114
Köp
Spara som favorit
Finns även som
Visa alla 8 format & utgåvor
Read the award-winning, critically acclaimed, multi-million-copy-selling science-fiction phenomenon - soon to be a Netflix Original Series from the creators of Game of Thrones. Imagine the universe as a forest, patrolled by numberless and nameless predators. In this forest, stealth is survival - any civilisation that reveals its location is prey. Earth has. Now the predators are coming. Crossing light years, the Trisolarians will reach Earth in four centuries' time. But the sophons, their extra-dimensional agents and saboteurs, are already here. Only the individual human mind remains immune to their influence. This is the motivation for the Wallfacer Project, a last-ditch defence that grants four individuals almost absolute power to design secret strategies, hidden through deceit and misdirection from human and alien alike. Three of the Wallfacers are influential statesmen and scientists, but the fourth is a total unknown. Luo Ji, an unambitious Chinese astronomer, is baffled by his new status. All he knows is that he's the one Wallfacer that Trisolaris wants dead. Praise for The Three-Body Problem: 'Your next favourite sci-fi novel' Wired 'Immense' Barack Obama 'Unique' George R.R. Martin 'SF in the grand style' Guardian 'Mind-altering and immersive' Daily Mail Winner of the Hugo and Galaxy Awards for Best Novel
Visa hela texten

'Wildly imaginative, really interesting... The scope of it was immense' -- Barack Obama, 44th President of the United States 'A milestone in Chinese science fiction' * New York Times * 'A marvellous melange of awe-inspiring scientific concepts, clever plotting and quirky yet plausible characters, all conveyed in in a plain style capable of signalling hidden depths' * The Times * 'The best kind of science fiction' -- Kim Stanley Robinson Vivid, imaginative and rooted in cutting-edge science... Cixin stands at the top tier of speculative fiction in any language' -- David Brin Full of surprises and wondrous ideas... The depth of feeling here is extraordinary. Emotion and science brilliantly co-exist. To call the vision grand and ambitious seems a ridiculous understatement... I await the conclusion, Death's End, in the spring with enormous anticipation. I have no doubt that when this trilogy is complete we will have a masterpiece on our hands' * For Winter Nights * Hauntingly gentle in its delivery and gorgeous in its own wondrous atmosphere, The Dark Forest is a quiet slice of lovely science fiction... it's bursting with character and ingenuity' * Starburst magazine * 'Chinese SF has been neglected in the wider world for far too long' * Interzone * A breakthrough book... a unique blend of scientific and philosophical speculation, politics and history, conspiracy theory and cosmology, where kings and emperors from both western and Chinese history mingle in a dreamlike game world, while cops and physicists deal with global conspiracies, murders, and alien invasions in the real world' -- George R.R. Martin. '[The Three-Body Problem and The Dark Forest are] the works of fiction I am most enthusiastic about' * Bloomberg. * 'Even what doesn't happen is epic' * London Review of Books *

Cixin Liu is China's #1 SF writer and author of The Three-Body Problem - the first ever translated novel to win a Hugo Award. Prior to becoming a writer, Liu worked as an engineer in a power plant in Yangquan.