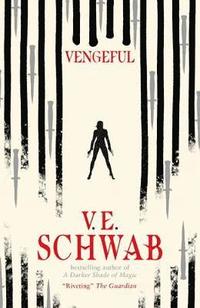 av V E Schwab
Häftad Engelska, 2019-03-19
95
Köp
Spara som favorit
Skickas inom 5-8 vardagar.
Gratis frakt inom Sverige över 159 kr för privatpersoner.
Finns även som
Visa alla 5 format & utgåvor
A super-powered collision of extraordinary minds and vengeful intentions-V. E. Schwab returns with the thrilling follow-up to Vicious. Magneto and Professor X. Superman and Lex Luthor. Victor Vale and Eli Ever. Sydney and Serena Clarke. Great partnerships, now soured on the vine. But Marcella Riggins needs no one. Flush from her brush with death, she's finally gained the control she's always sought-and will use her newfound power to bring the city of Merit to its knees. She'll do whatever it takes, collecting her own sidekicks, and leveraging the two most infamous EOs, Victor Vale and Eli Ever, against each other once more. With Marcella's rise, new enmities create opportunity-and the stage of Merit City will once again be set for a final, terrible reckoning.
Visa hela texten

V.E. Schwab is the No.1 New York Times bestselling author of ten books, including This Savage Song and the Darker Shade of Magic series, whose first book was described as "a classic work of fantasy" by Deborah Harkness. It was one of Waterstones' Best Fantasy Books of 2015 and one of The Guardian's Best Science Fiction novels. The Independent has called her "The natural successor to Diana Wynne Jones."