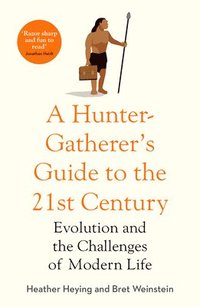 A Hunter-Gatherer's Guide to the 21st Century

Evolution and the Challenges of Modern Life

av Heather Heying, Bret Weinstein
Inbunden Engelska, 2021-09-16
237
Köp
Spara som favorit
Finns även som
Visa alla 1 format & utgåvor
A bold, provocative exploration of the tension between our evolutionary history and our modern woes - and what we can do about it We are living through the most prosperous age in all of human history, yet we are listless, divided and miserable. Wealth and comfort are unparalleled, but our political landscape is unmoored, and rates of suicide, loneliness and chronic illness continue to skyrocket. How do we explain the gap between these truths? And how should we respond? For evolutionary biologists Heather Heying and Bret Weinstein, the cause of our woes is clear: the modern world is out of sync with our ancient brains and bodies. We evolved to live in clans, but today many people don't even know their neighbours' names. Survival in our earliest societies depended on living in harmony with nature, but today the food we eat, the work we do - even the light we absorb - is radically different from what our minds and bodies evolved to expect. In this book, Heying and Weinstein draw on decades of their work teaching in college classrooms and exploring earth's most biodiverse ecosystems to confront today's pressing social ills - from widespread sleep deprivation and dangerous diets to damaging parenting styles and backward education practices. A Hunter-Gatherer's Guide to the 21st Century outlines a science-based worldview that will empower you to live a better, wiser life.
Visa hela texten

'This book guides readers through the most pressing puzzles of our time, developing their conceptual toolkit without being didactic. Razor-sharp and fun to read, A Hunter Gatherer's Guide to the 21st Century secures Weinstein and Heying's reputation as heroes who stand up not only for academic freedom, but also moral principles' - Jonathan Haidt, author of The Righteous Mind 'I have never read such a bold, well-researched, and succinct exploration of the puzzling predicament we find ourselves in. Anyone who wonders why the most comfortable society in history - our own - has such astronomical rates of depression, anxiety and poor health will find abundant answers in A Hunter-Gatherer's Guide to the 21st Century' - Sebastian Junger, author of The Perfect Storm and Tribe 'A Hunter-Gatherer's Guide to the 21st Century has given me at least five evolutionary concepts that have become central to my way of viewing the world' - Jamie Wheal, executive director of the Flow Genome Project and co-author of Stealing Fire 'Bret and Heather are highly regarded evolutionary biologists, very clear thinkers and communicators' - Robert Sapolsky, author of Behave

Heather Heying and Bret Weinstein are evolutionary biologists who have been invited to address the US Congress, the Department of Justice and the Department of Education, and have spoken before audiences across the globe. They both earned PhDs in Biology from the University of Michigan, where their research on evolution and adaptation earned awards for its quality and innovation. They have been visiting fellows at Princeton University, and before that were professors at the Evergreen State College for fifteen years. Together they co-host the Dark Horse podcast, which has over a quarter of a million subscribers and is ranked in the top ten most popular science podcasts on YouTube.