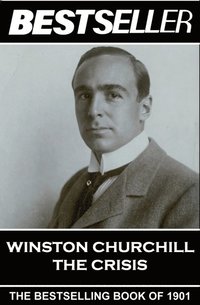 Winston Churchill - The Crisis: The Bestseller of 1901

av Winston Churchill
Häftad Engelska, 2019-12-01
219
Köp
Spara som favorit
Skickas inom 7-10 vardagar.
Gratis frakt inom Sverige över 159 kr för privatpersoner.
Winston Churchill was born on November 10th, 1871 in St. Louis, Missouri. Tragically his mother died soon after his birth, and he was thereafter raised by Emma's half-sister, Louisa and her husband.He was educated at Smith Academy in Missouri and the United States Naval Academy, and graduated in 1894. Whilst there he was recognised as a diligent student who took part in the complete range of offered activities. He became an expert fencer and also organized and captained, at Annapolis, the first eight-oared crew.After leaving he became an editor of the Army and Navy Journal.In 1895, Churchill became managing editor of the Cosmopolitan Magazine, but within twelve months he resigned in order to pursue his own writings full time.Despite his own background of privilege and money this move to a literary career was undoubtedly supported in every way by his marriage in 1895 to the St Louis heiress, Mabel Harlakenden Hall.Her support, together with the brilliance of his talents, helped ensure a full-time literary career. In time his writings would cover a spectrum from novels to poems to essays and plays.His first novel to appear in book form was 'The Celebrity' (1898). However, 'Mr Keegan's Elopement' had been published in 1896 as a magazine serial and only as a hardback in 1903. Churchill's next novel-'Richard Carvel' (1899)-was a phenomenal success, selling two million copies. It brought fame, a very appreciative audience and riches. He followed this with two further best sellers: 'The Crisis' (1901) and 'The Crossing' (1904).These early novels were historical, but he gradually moved to setting later ones in more contemporary settings and to include his political ideas.In the 1890s, Churchill's writings came to be confused with those of the British writer/politician with the same name. At that time, the American was the far better known of the two. It fell to the Englishman to write to his counterpart regarding the confusion their name was causing. They agreed that the British Churchill should be styled &quoteWinston Spencer Churchill&quote, this was later reduced to the more familiar &quoteWinston S. Churchill&quote.In 1898, Churchill commissioned a mansion, designed by Charles Platt, to be built in Cornish, New Hampshire. The following year he and his family moved there. It was named after his wife: Harlakenden House. Churchill was keen on both the local art; he became involved in the Cornish Art Colony and its politics; he was elected to the state legislature, as a Republican, in 1903 and 1905.In 1906 a tilt at the Republican nomination for governor of New Hampshire was unsuccessful. In 1912, he was nominated as the Progressive candidate for governor but again lost and thereafter never sought public office again. In 1917, he toured the battlefields of World War I and wrote about the experience in his non-fiction work: 'A Traveller In War-Time'.Sometime after this he started to paint in watercolors.His books regularly topped the best seller lists. Between 1901-1915 he topped the Bestseller of the year charts six times.In 1919, Churchill decided to stop writing and withdrew from public life. His sales fell and he became slowly forgotten. In 1940, 'The Uncharted Way', his first book in twenty years, based on his thoughts on religion, was published. It received little attention or sales.After fifty years of marriage Mabel died in 1945.Shortly before his death Churchill said, &quoteIt is very difficult now for me to think of myself as a writer of novels, as all that seems to belong to another life.&quoteWinston Churchill died in Winter Park, Florida, on March 12th 1947 of a heart attack. He was 75.
Visa hela texten