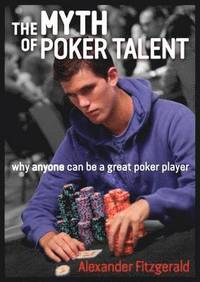 The Myth of Poker Talent

why anyone can be a great poker player

av Alexander Fitzgerald
Häftad Engelska, 2016-08-01
299
Köp
Spara som favorit
"Genius is one percent inspiration and ninety-nine percent perspiration. - Thomas Edison The Myth of Poker Talent is a unique book and is the culmination of renowned poker trainer Alex Fitzgerald's work with over 1000 students over a 10 year period. Alex has discovered what makes a winning poker player and here's the good news. It has nothing to do with poker talent. If you want to excel at the game you'll need to buy this book, study Alex's method and work hard - but you don't need talent. Alex's method focuses on understanding generic poker situations and not specific hands. As a highly experienced teacher, he expresses his ideas in simple, easy-to-understand language. The Myth of Poker Talent will teach you:* A model of poker" built from scratch* An understanding of every poker tool* Why much of what experienced players think they know is actually wrong ...and much, much more.
Visa hela texten

Alex is one of the best coaches in the game right now. He is able to break down hands and strategies for players of all levels. He's very articulate and one of the hardest workers I know--Faraz Jaka, Professional Poker Player

Alexander Fitzgerald is a professional poker player who has been in the industry for over a decade. After running away from home during high school Alex worked as a commercial fisherman and security guard, till he found poker. While describing himself of average intelligence, Alex has been able to accrue more than $3,500,000+ in tournament earnings around the world, final tabling EPTs, multiple WCOOPs and FTOPs events, along with practically every regular tournament online. During his reign as poker tournament warhorse Alex has started a poker consultancy which serves more than 1,000 professional poker players in 60 countries. Constantly at work, Alex has published hundreds of training videos, articles, and webinars. He is described by many as the most important tournament coach in the world.