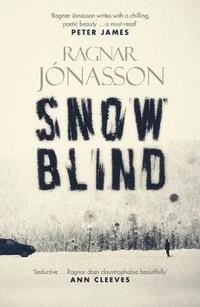 av Ragnar Jonasson
(1 röst)
Häftad Engelska, 2015-06-15
107
Köp
Spara som favorit
Finns även som
Visa alla 2 format & utgåvor
FIRST IN THE INTERNATIONAL BESTSELLING DARK ICELAND SERIES OVER A MILLION COPIES SOLD A murder takes place in the isolated Icelandic town of Siglufjoerdur, where an avalanche has cut off all communication and the unrelenting snow threatens rookie police officer Ari Thor Arason first investigation... 'A modern Icelandic take on an Agatha Christie-style mystery, as twisty as any slalom...' Ian Rankin 'Ragnar J nasson writes with a chilling, poetic beauty' Peter James 'Seductive ... Ragnar does claustrophobia beautifully' Ann Cleeves ________________ Siglufjoerdur: an idyllically quiet fishing village in Northern Iceland, where no one locks their doors - accessible only via a small mountain tunnel. Ari Thor Arason: a rookie policeman on his first posting, far from his girlfriend in Reykjavik - with a past that he's unable to leave behind. When a young woman is found lying half-naked in the snow, bleeding and unconscious, and a highly esteemed, elderly writer falls to his death in the local theatre, Ari is dragged straight into the heart of a community where he can trust no one, and secrets and lies are a way of life. An avalanche and unremitting snowstorms close the mountain pass, and the 24-hour darkness threatens to push Ari over the edge, as curtains begin to twitch, and his investigation becomes increasingly complex, chilling and personal. Past plays tag with the present and the claustrophobic tension mounts, while Ari is thrust ever deeper into his own darkness - blinded by snow, and with a killer on the loose. Taut and terrifying, Snowblind is a startling debut from an extraordinary new talent, taking Nordic Noir to soaring new heights. ________________ 'His first novel to be translated into English has all the skilful plotting of an old-fashioned whodunnit although it feels bitingly contemporary in setting and tone' Sunday Express 'A chiller of a thriller' Washington Post 'A classic crime story seen through a uniquely Icelandic lens. First rate and highly recommended' Lee Child 'Required reading' New York Post 'Morally more equivocal than most traditional whodunnits, and it offers alluring glimpses of darker, and infinitely more threatening horizons' Independent 'A truly chilling debut, perfect for fans of Karin Fossum and Henning Mankell' Eva Dolan 'A stunning murder mystery by one of Iceland's finest writers' Yrsa Sigurdardottir 'There is a young pretender beavering away, his eye on the crown: Ragnar Jonasson...' Barry Forshaw 'As dazzling as its title implies' William Ryan 'An isolated community, subtle clueing, clever misdirection and more than a few surprises combine to give a modern day Golden Age whodunnit. I look forward to the next in the series' Dr John Curran 'The best sort of gloomy storytelling' Chicago Tribune 'The prose is stark and minimal ... bleakly brilliant' Metro 'A chilling, thrilling slice of Icelandic Noir' Thomas Enger 'This classically crafted whodunit holds up nicely, but Jonasson's true gift is for describing the daunting beauty of the fierce setting, lashed by blinding snowstorms that smother the village in "a thick, white darkness" that is strangely comforting' New York Times
Visa hela texten

'Is King Arnaldur [Indridason] looking to his laurels? There is a young pretender beavering away, his eye on the crown: Ragnar Jonasson - ' Barry Forshaw

Icelandic crime writer Ragnar Jonasson was born in Reykjavik, and currently works as a lawyer, while teaching copyright law at the Reykjavik University Law School. In the past, he's worked in TV and radio, including as a news reporter for the Icelandic National Broadcasting Service. Before embarking on a writing career, Ragnar translated fourteen Agatha Christie novels into Icelandic, and has had several short stories published in German, English and Icelandic literary magazines. Ragnar set up the first overseas chapter of the CWA (Crime Writers' Association) in Reykjavik, and is co-founder of the International crime-writing festival Iceland Noir. Ragnar's debut thriller, Snowblind became an almost instant bestseller when it was published in June 2015 with Nightblind (winner of the Dead Good Reads Most Captivating Crime in Translation Award) and then Blackout and Rupture following soon after. To date, Ragnar Jonasson has written five novels in the Dark Iceland series, which has been optioned for TV by On the Corner. He lives in Reykjavik with his wife and two daughters. Visit him on Twitter @ragnarjo or at ragnarjonasson.com Quentin Bates escaped English suburbia as a teenager, jumping at the chance of a gap year working in Iceland. For a variety of reasons, the gap year stretched to become a gap decade, during which time he went native in the north of Iceland, acquiring a new language a new profession as a seaman and a family, before decamping en masse for England. He worked as a truck driver, teacher, netmaker and trawlerman at various times before falling into journalism, largely by accident. He is the author of a series of crime novels set in present-day Iceland (Frozen Out, Cold Steal, Chilled to the Bone, Winterlude, Cold Comfort and Thin Ice which have been published worldwide. He has translated all of Ragnar Jonasson's Dark Iceland series.