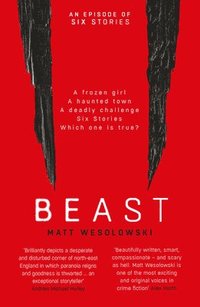 av Matt Wesolowski
Häftad Engelska, 2020-02-20
119
Köp
Spara som favorit
Skickas inom 5-8 vardagar.
Gratis frakt inom Sverige över 159 kr för privatpersoner.
Finns även som
Visa alla 1 format & utgåvor
Elusive online journalist Scott King examines the chilling case of a young vlogger found frozen to death in the legendary local 'vampire tower', in another explosive episode of Six Stories... ***Winner of the Capital Crime Award for Best Independent Voice*** 'Matt Wesolowski brilliantly depicts a desperate and disturbed corner of north-east England in which paranoia reigns and goodness is thwarted ... an exceptional storyteller' Andrew Michael Hurley 'Endlessly inventive and with literary thrills a-plenty, Matt Wesolowski is boldly carving his own uniquely dark niche in fiction' Benjamin Myers 'Beautifully written, smart, compassionate - and scary as hell. Matt Wesolowski is one of the most exciting and original voices in crime fiction' Alex North ____________________ A frozen girl A haunted town A deadly challenge Six Stories Which one is true? In the wake of the 'Beast from the East' cold snap that ravaged the UK in 2018, a grisly discovery was made in a ruin on the Northumbrian coast. Twenty-four-year-old Vlogger, Elizabeth Barton, had been barricaded inside what locals refer to as 'The Vampire Tower', where she was later found frozen to death. Three young men, part of an alleged 'cult', were convicted of this terrible crime, which they described as a 'prank gone wrong'. However, in the small town of Ergarth, questions have been raised about the nature of Elizabeth Barton's death and whether the three convicted youths were even responsible. Elusive online journalist Scott King speaks to six witnesses - people who knew both the victim and the three killers - to peer beneath the surface of the case. He uncovers whispers of a shocking online craze that held the young of Ergarth in its thrall and drove them to escalate a series of pranks in the name of internet fame. He hears of an abattoir on the edge of town, which held more than simple slaughter behind its walls, the tragic and chilling legend of the 'Ergarth Vampire... Both a compulsive, taut and terrifying thriller, and a bleak and distressing look at modern society's desperation for attention, Beast will unveil a darkness from which you may never return... ____________________ Praise for the Six Stories series 'Frighteningly wonderful ... one of the best books I've read in years' Khurrum Rahman 'Disturbing, compelling and atmospheric, it will terrify and enthral you in equal measure' M W Craven 'First-class plotting' S Magazine 'A dazzling fictional mystery' Foreword Reviews 'Readers of Kathleen Barber's Are You Sleeping and fans of Ruth Ware will enjoy this slim but compelling novel' Booklist 'Insidiously terrifying, with possibly the creepiest woods since The Blair Witch Project ... a genuine chiller with a whammy of an ending' C J Tudor 'Bold, clever and genuinely chilling' Deidre O'Brien, Sunday Mirror 'A genuine genre-bending debut' Carla McKay, Daily Mail 'Impeccably crafted and gripping from start to finish' Doug Johnstone, The Big Issue 'The very epitome of a must-read' Heat 'Wonderfully horrifying ... the suspense crackles' James Oswald 'Original, inventive and dazzlingly clever' Fiona Cummins 'A complex and subtle mystery, unfolding like dark origami to reveal the black heart inside' Michael Marshall Smith 'Haunting, horrifying, and heartrending. Fans of Arthur Machen, whose unsettling tale The White People provides an epigraph, will want to check this one out' Publishers Weekly
Visa hela texten

"As stunning as it is terrifying." --Booklist starred review of Changeling "Exceptional . . . by turns haunting, horrifying, and heartrending." --Publishers Weekly starred review of Changeling "Just getting my breath back after reading the last few pages of this. Matt Wesolowski is one of most exciting new writers of the past few years. Never disappoints. This is a creepy, chilling read that is ridiculously difficult to put down. The ending is just incredible." --Luca Veste, author, The Bone Keeper on Changeling "A dazzling fictional mystery." --Foreword Reviews on Changeling "As surprising as it is good, and should appeal to readers who enjoy crime with an eerie, dark vibe." --Mystery Scene on Hydra "Wesolowski skillfully draws readers into a story of increasing depth and force." --Publishers Weekly on Hydra

Matt Wesolowski is an author from Newcastle-Upon-Tyne in the UK. He is an English tutor for young people in care. Matt started his writing career in horror, and his short horror fiction has been published in numerous UK- an US-based anthologies such as Midnight Movie Creature, Selfies from the End of the World, Cold Iron and many more. His novella, The Black Land, a horror set on the Northumberland coast, was published in 2013. Matt was a winner of the Pitch Perfect competition at Bloody Scotland Crime Writing Festival in 2015. His debut thriller, Six Stories, was an Amazon bestseller in the USA, Canada, the UK and Australia, and a WHSmith Fresh Talent pick, and film rights were sold to a major Hollywood studio. Hydra, was published in 2018 and became an international bestseller. Follow Matt on Twitter @ConcreteKraken and on his website: mjwesolowskiauthor.wordpress.com