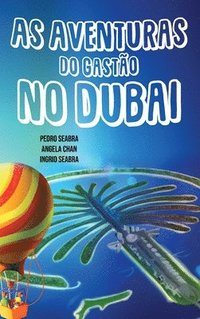 As Aventuras do Gastao no Dubai

av Pedro Seabra, Angela Chan, Ingrid Seabra
Inbunden Portugisiska, 2022-02-05
329
Köp
Spara som favorit
What do you get when you mix a young Portuguese boy, his globe-trotting parents, and a sense of adventure? As Aventuras do Gasto No Dubai of course! Kids will love following along as Gasto explores all that Dubai has to offer, from its beautiful beaches and towering skyscrapers to its bustling bazaars and souks. During their trip, Gasto and his family visit some of the most famous landmarks in Dubai, including the Burj Khalifa and the Dubai Mall. They also go on a night desert safari, ride camels through the sand dunes, and even take a hot air balloon ride over the Palm Jumeirah. It's an adventure that your child can experience right alongside Gasto himself. Join him on his exciting adventures as he explores Dubai and learns about its rich history, culture, and traditions. As Aventuras do Gasto No Dubai is the fourth book in the As Aventuras do Gasto series. So if you're looking for a fun and educational children's book, be sure to check out As Aventuras do Gasto No Dubai!
Visa hela texten

Pedro Seabra is a published author, serial entrepreneur, and venture capitalist. He is interested in philosophy, quantum computing, robotics, and other innovative technologies and their impact on society. Angela Chan is a published author and venture capitalist. She has dedicated her life to embracing anything that promises change for the better, including artificial intelligence, virtual reality, and other emerging fields. Ingrid Seabra began her career as a credit risk analyst at Barclays Bank in London. After that, she worked as a statistician for the European Central Bank (ECB) in Germany. She then became a senior biostatistician at BIAL Pharmaceutical in Portugal and has been published in several scientific articles. Currently, Ingrid is an author, educator, and consultant on statistics and mathematics, and a researcher on new technologies.