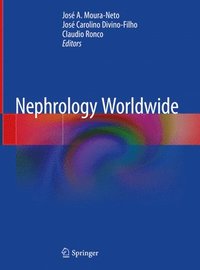 av Jose A Moura-Neto, Jose Carolino Divino-Filho, Claudio Ronco
Inbunden Engelska, 2021-03-04
1418
Köp
Spara som favorit
Finns även som
Visa alla 2 format & utgåvor
This book presents contributions from leading international experts in the field of nephrology. Each chapter is independent and discusses nephrology in the author's country, including the history of nephrology development, kidney disease epidemiology, clinical nephrology, dialysis practice in acute and chronic renal failure settings (hemodialysis, hemodiafiltration, peritoneal dialysis), pediatric nephrology, and kidney transplantation. In addition, the book covers topics such as the job market for nephrologists, reimbursement, nephrology education, and the number of professionals in the private and public sectors. With 53 chapters and more than 300 authors from all continents offering a unique perspective on nephrology practice, it provides a much-needed information source for nephrologists around the globe. The reader will be able to travel through "Nephrology Worldwide", a pleasant reading experience with not only relevant information and updated data, but also a comprehensive look at the history, countries' peculiarities, and a critical analysis of the scenario of nephrology and renal replacement therapy. A valuable resource for healthcare professionals and other stakeholders interested in learning about the status quo of Nephrology Worldwide. "Both the failings and the successes are outlined in a way that should make this book a compelling read, not just for the well-informed renal physician, but also for planners and policy makers whose thinking and actions are integral to the way we practice medicine." - Sir Peter J. Ratcliffe, Nephrologist and 2019 Nobel Prize Winner More information on the Nephrology Worldwide initiative can be found at www.nephrologyworldwide.com.
Visa hela texten

Jose A. Moura-Neto, MD, MBA Received his medical degree from Bahiana School of Medicine and Public Health in Salvador, Brazil in 2011. He completed residencies in Internal Medicine in Rio de Janeiro (Federal Hospital of Andarai, 2012-2014) and in Nephrology at the University Hospital of Rio de Janeiro State University (UERJ, 2014-2016). Additionally, he was a Kidney Transplantation Fellow at the same University Hospital - UERJ - from 2016 to 2017. In 2017, he was approved as a certified nephrologist also by the Brazilian Society of Nephrology. He holds an MBA in Health Management from FGV (2014-2016) and a Master's in Administration from FGV (2016-2017). In 2018, Moura-Neto was selected as a Young Medical Leader by the National Academy of Medicine in Brazil. In the same year, he edited the book "Renal Replacement Therapy: Controversies and Future Trends". The following year, he published the book "Renal Replacement Therapy 2: Controversies and Future Trends" in Portuguese. Currently, Moura-Neto is Deputy Director of the National Board of Dialysis of the Brazilian Society of Nephrology, President of the Bahian Society of Nephrology and Visual Abstract Editor for the Brazilian Journal of Nephrology. He also serves as Director of Quality on the Board of the CSB Group and works as a nephrologist in Salvador, focusing his medical and academic activities on renal replacement therapy, chronic kidney disease and health management. Jose Carolino Divino-Filho, MD, PhD Graduated from Bahiana School of Medicine in Salvador, Brazil, and received nephrology training at the Departments of Renal Medicine in Lund and Stockholm, Sweden. He returned to Brazil and started a Section of Renal Medicine at Hospital Sao Severino, Sorocaba, Brazil in 1983. In 1987, he moved back to Stockholm to work as a nephrologist and researcher with Professor Jonas Bergstroem at the Division of Renal Medicine, Huddinge University Hospital, Karolinska Institutet, and in 1992 he also became a senior consultant nephrologist at the Sophiahemmet Royal Hospital in Stockholm. He was awarded his Ph.D. by the Divisions of Renal Medicine, Department of Clinical Sciences and the Endocrine & Diabetes Unit, Department of Molecular Medicine, Karolinska Institutet in 1998. He was one of the pioneers of CAPD both in Sweden (Lund, 1980) and Brazil (Sorocaba, 1984) as well as on-line convective therapies in Sweden (Stockholm 1994). In 1999, he joined Baxter Renal Division and worked initially as a Medical Director for the Renal Division Europe based in Brussels, then as Medical Vice-President for Latin America based in Mexico City and lastly for ECEMEA (Eastern and Central Europe, Middle East and Africa) based in Zurich. From 2011 through 2015 worked as Vice-President for Home Therapies for Diaverum Health Care. He has also, in the last few years in an intermittent fashion, worked as a senior clinical consultant nephrologist at the Karolinska University Huddinge and SOES hospitals as well as in dialysis clinics in Sweden, also cooperating with several nephrology groups around the world (especially Brazil, Latin America, South Africa, Saudi Arabia and Europe) and currently represents Latin America on the International Society of Peritoneal Dialysis Council. Claudio Ronco, MD Full professor of Nephrology at the University of Padova. Director of the Department of Nephrology and the International Renal Research Institute (IRRIV) at San Bortolo Hospital, Vicenza, Italy. He graduated in 1976 and specialized in nephrology at the University of Padua in 1979. He has been Director of the Laboratory of the RRI and Beth Israel MC in New York and Professor of Medicine at the Albert Einstein College of Medicine. He is an External Professor at the University of Virginia of Charlottesville as well as Fudan and Shanghai Jiao Tong Universities. He received an honorary degree from the University of Patras. He has authored 1294 papers, 70 books and 125 book chap