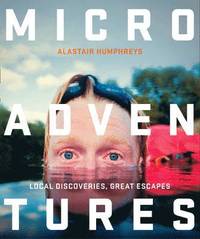 av Alastair Humphreys
Häftad Engelska, 2014-06-05
209
Köp
Spara som favorit
Finns även som
Visa alla 1 format & utgåvor
'Enthusiastic, pleasingly madcap' Geographical Adventure - something that's new and exhilarating, outside your comfort zone. Adventures change you and how you see the world, and all you need is an open mind, bags of enthusiasm and boundless curiosity. So what's a microadventure? It's close to home, cheap, simple, short and 100% guaranteed to refresh your life. A microadventure takes the spirit of a big adventure and squeezes it into a day or even a few hours. The point of a microadventure is that you don't need lots of time and money to meet a new challenge. This practical guide is filled with ideas for microadventures - for you to experience on your own or with friends and family - and over 150 stunning photographs, plus tips and advice on safety and kit. Whether it's sleeping on a hilltop or going for a wild swim, cycling a lap of the Isle of Wight or walking home for Christmas, it's time you discovered something new about yourself and the world outside your window. Adventure is everywhere, every day and it is up to us to find it.
Visa hela texten

Alastair Humphreys is a British adventurer, author, blogger, film-maker and photographer. He spent over four years cycling round the world, a journey of 46,000 miles through 60 countries and across five continents. More recently, Alastair has walked across southern India, rowed across the Atlantic Ocean, run six marathons through the Sahara desert, completed a crossing of Iceland, and participated in an expedition in the Arctic, close to the magnetic North Pole. He has trekked 1,000 miles across the Empty Quarter desert and 120 miles round the M25 motorway - one of his pioneering microadventures. He has written nine books and has been named as one of National Geographic's Adventurers of the Year.