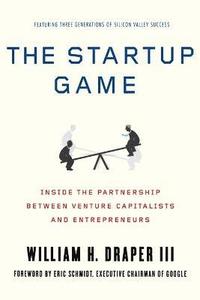 Inside the Partnership Between Venture Capitalists and Entrepreneurs

av Professor William H Draper Iii, Eric Schmidt Iii
Häftad Engelska, 2012-06-15
169
Köp
Spara som favorit
Finns även som
Visa alla 1 format & utgåvor
Entrepreneurs drive the future, and the last several decades have been a thrilling ride of astounding, far-reaching innovation. Behind this transformative progress are the venture capitalists, who are at once the investors, coaches, and allies of the entrepreneurs. William H. Draper III knows this story firsthand because as a venture capitalist he helped write it. For more than 40 years, Bill Draper has worked with top entrepreneurs in fabled Silicon Valley, where today's vision is made into tomorrow's reality. The Startup Game is the first up-close look at how the relationship between venture capitalists and entrepreneurs is critical to enhancing the success of any economy. From a venture capitalist who saw the potential of Skype, Hotmail, OpenTable, and many other companies comes firsthand stories of success. In these pages, Draper explores how to evaluate innovative ideas and the entrepreneurs behind those ideas, and he shares lessons from Yahoo, Zappos, Baidu, Tesla Motors, Activision, Measurex, and more. Also, in revealing his on-the-ground account of how Deng Xiaoping brought China roaring into the modern world and how Manmohan Singh unlocked the creative genius of Indian entrepreneurs, Draper stresses the essential value of farsighted political leadership in creating opportunity. Lastly, the author discusses his efforts to bring the best practices of the venture capitalist/entrepreneur partnership to the social sector. Written in an engaging narrative and incorporating many of the author's personal experiences, this book provides a much-needed look at how the world of venture capital and entrepreneurship works.
Visa hela texten

'Whether you've experienced the joys and pains of Silicon Valley directly or just want to learn from those who have, you can't do better than this firsthand account of the storied three generations of Drapers. Bill has done a huge favor for those of us who are passionate about technology and innovation by chronicling their experiences. Theirs is a tale worth knowing.' - Eric Schmidt, Chairman and CEO of Google 'Bill Draper, who began investing back when Silicon Valley was only known for its fruit orchards, tells the story behind some of the most pivotal companies of the last half-century and offers a fascinating look at the inner workings of the venture capital industry.' - Elon Musk, co-founder of Paypal, co-founder, CEO, and CTO of SpaceX, co-founder and CEO of Tesla Motors, chairman of Solar City 'No single venture capitalist more embodies the best in venture capital; Bill Draper sets the bar high. It is not just his demonstrable success in business, but it is also his high ethical standards that earn him the respect and the following that he has in the world of business.' - President George H.W. Bush 'I wish I had this book when I started salesforce.com. This is more than a book about how to win over a venture capitalist, or an inside look at this mysterious and powerful industry. This is a book about innovation. Anyone trying to transform a good idea into a breakthrough company with massive impact must read this book.' - Marc Benioff, Chairman and CEO of salesforce.com 'This is an inspirational tale about using entrepreneurial talent and energy to improve the world. In this book Bill describes a life of meaning and impact that spans venture capital, public service, and philanthropy. We need more Drapers!' - William H. Sahlman, Dimitri V. D'Arbeloff, MBA Class of 1955 Professor of Business Administration and Senior Associate Dean for External Relations, Harvard Business School, USA 'Bill Draper is one of the most successful and respected individuals in the venture capital industry. Having funded several hundred technology companies, he has seen it all. The Startup Game is not only a captivating account of Silicon Valley, its entrepreneurs, and the venture capitalists who backed them, but it is also an intriguing depiction of how the world of entrepreneurship works.' - John Doerr, partner, Kleiner Perkins Caufield & Byers 'An absolutely fascinating and well-told story by one of the great men - and gentlemen - of the Silicon Valley startup world. Must - indeed, required - reading for anyone interested in the American entrepreneurial adventure.' - Christopher Buckley, author and political satirist 'While Bill has a famous reputation as a venture capitalist, the best untold story is how strategic he has been in backing a cadre of world-class social entrepreneurs who are creating massive change. Consider the stories of Bill as a philanthropist as an unexpected bonus of reading this book.' - John Wood, Founder and Executive Chairman, Room to Read 'Required reading. William H. Draper III, to give him his correct title, has lived an adventurous life, which makes his book more exciting than simply a list of high-tech firms he has backed. If the subject interests you then this volume offers advice from a wise figure.' - The Financial Times 'Moving back and forth between the worlds of business and international diplomacy, Draper's book uses anecdotes from a varied career to illuminate the partnership between VCs and startups as well as the ever-changing role of entrepreneurship in economies around the world.' - The Huffington Post 'Reads like a first-person history of the venture capital industry. It includes lots of exposition for those not familiar with venture capital, a generous dose of advice and anecdotes.' - Fortune 'Bill Draper has written a gem... a mix of practitioner stories with some autobiography mixed in.' - Business Insider 'Bill Draper is one of the most knowledgeable people in the world about venture capital inve

William H. Draper, III is one of the West Coast's first venture capitalists and the founder of Sutter Hill Ventures in Palo Alto, California. Former Chairman of the Export-Import Bank of the United States and Undersecretary General of the United Nations, he is currently the General Partner of the venture capital companies Draper Richards L.P., Draper Investment Company, and Draper International. He is also a member of the Council on Foreign Relations and the President's Council on International Activities at Yale University. He received the Vision Award from Software Developers Forum and was inducted into the Dow Jones Venture Capital Hall of Fame. He has also received honorary awards from the Silicon Valley Fast 50, the International Business Forum, the National Venture Capital Association, Harvard and Yale Universities, University of California, and Institute of International Education. He lives in Atherton, California.

Foreword By Eric Schmidt, CEO and Chairman of Google Introduction: Breakfast at Buck's Three Generations How it Works What it Takes My 'Missing' Decade To India and Back From International to Global Finding the Exit The Business of Philanthropy Fitting it All Together Afterward by Tim Draper