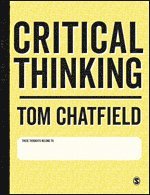 Your Guide to Effective Argument, Successful Analysis and Independent Study

Do you need to demonstrate a good argument or find more evidence?  Are you mystified by your tutor's comment 'critical analysis needed'?  What does it really mean to think well - and how do you learn to do it?

Critical thinking is a set of techniques. You just need to learn them.

So here?s your personal toolkit for demystifying critical engagement. I?ll show you how to sharpen your critical thinking by developing and practicing this set of skills, so you can?

Designed to work seamlessly with a power pack of digital resources and exercises, you'll find practical and effective tools to think and write critically in an information-saturated age.  No matter whether you're launching on your first degree or arriving as an international or mature student, Critical Thinking gives you the skills, insights and confidence to succeed.

In your critical thinking toolkit

This primer on critical thinking expertly introduces reasoning, argumentation, rhetoric, and bias, and how understanding those concepts can make us better readers, researchers, and writers. Chatfield chooses just the right combination of formal writing and casual address, creating the feeling that readers are learning from a trusted, witty friend.

Tom Chatfield’s Critical Thinking contains sensible, grounded examples, and illustrations...serving as a useful primer to the subject. This is a book happy to be written on, queried and argued with. The exercises sprinkled throughout are well judged and encourage a deep reading. The consistency of tone and design make it an impressive achievement, bringing light and clarity to an area which can present as murky and vague. I recommend it strongly. It will certainly be a useful addition to the teaching materials my school already uses, but its appeal goes well beyond classroom walls due to its breadth, depth and the clarity of its outlook...I would be very happy to see students and colleagues alike walking around campus with dog-eared, annotated and bookmarked copies of Critical Thinking.

I can’t stress enough what an excellent addition this is to a rather - what I thought, anyway – saturated market. Well done to all involved! It’s a very comprehensive text, and one which I’d happily recommend to staff and students alike. I’ll certainly be drawing inspiration from it when building class resources in future.

Some people are naturally gifted critical thinkers (and, if you’re a researcher, it’s pretty hard to advance without some skill in that area) but for those who need to rethink their thinking or want a crash course in how to develop and hone their analysis skills, Tom Chatfield’s new book is well worth picking up… The engaging workbook-style layout helps keep the information being imparted consistently interesting and fun to absorb.

I was pleasantly surprised to discover how accessible and engaging this book is. Some other texts on the topic can be daunting and to read, with concepts not always being easy to grasp. However, the subject is presented in a way.

Tom Chatfield’s Critical Thinking is probably the most essential book I’ve ever read. Not because it offers groundbreaking insights, but because it makes you stop and think, in a world whose pace is ever-increasing. If you’re new to academia, the book prepares you for the challenges of evaluating established theories and forming cohesive, convincing ...

Dr. Tom Chatfield is an author, tech philosopher and broadcaster. His books exploring the skills required to thrive in a digital age, including Critical Thinking (SAGE) and Live This Book! (Penguin), are published in over thirty territories and languages. His debut novel, the thriller This Is Gomorrah (Hodder), was published worldwide in July 2019.

Tom is interested in improving our understanding of digital technology and its uses in policy, education, and engagement. He is currently technology and media advisor at Agathos LLP; non-executive director at the Authors Licensing and Collecting Society; a faculty member at Londons School of Life; a Masters committee member at the Economics Research Council; a past guest faculty member at the Said Business School, Oxford; and a senior expert at the Global Governance Institute. Past collaborators include Google, the BBC, Channel 4 Education, Mind Candy, Shift, Flamingo London, Six to Start, Preloaded, Firefish, Future Lab, Sense Worldwide, Sugru, and Allianz.

Tom speaks and broadcasts around the world on technology, the arts, and media. Appearances include TED Global and the Cannes Lions Festival; authors@Google; the World Congress on Information Technology; Science Foo Camp; Intelligence Squared; the Houses of Parliament; Aspen Seminars for Leaders; and venues ranging from the Sydney Opera House to the Googleplex.

A launch columnist for the BBCs worldwide technology site, BBC Future, Tom writes and commentates widely in the international media, as well as guest lectures at universities in the UK and Europe. He is a regular on BBC radio and television, and broadcasts around the world.

What is critical thinking (and why does it matter?)? PART ONE: THE ART AND SCIENCE OF BEING REASONABLE Chapter 1: Understanding the reasons behind things Chapter 2: Spelling out arguments and assumptions Chapter 3: Reasoning with logic and certainty Chapter 4: Reasoning with observation and uncertainty Chapter 5: Developing explanations and theories Chapter 6: Assessing evidence and planning your reading strategy PART TWO: BEING REASONABLE IN AN UNREASONABLE WORLD Chapter 7: Getting to grips with rhetoric Chapter 8: Seeing through faulty reasoning Chapter 9: Understanding cognitive bias Chapter 10: Overcoming bias in yourself and others Chapter 11: Thinking critically about technology Chapter 12: Putting it all together: critical thinking in study, work and life