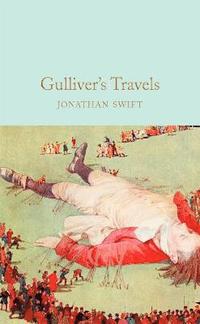 av Jonathan Swift
Inbunden Engelska, 2017-10-19
127
Bevaka
Spara som favorit
Tillfälligt slut – klicka "Bevaka" för att få ett mejl så fort boken går att köpa igen.
Finns även som
Visa alla 8 format & utgåvor
The misadventures of Lemuel Gulliver certainly are extraordinary. First he is shipwrecked in a strange land, and finds himself a prisoner of the tiny inhabitants of Lilliput. Then he washes up in Brobdingnag, where the people are giants of extraordinary proportions. Further exploits see him stranded with the scientists and philosophers of Laputa, and meeting a race of talking horses who rule over bestial humans. One of the finest satires in the English language, Gulliver's Travels delights in the mockery of everything from government to religion and - despite the passing of nearly three centuries - remains just as funny and relevant today. This gorgeous Macmillan Collector's Library edition of Jonathan Swift's Gulliver's Travels features the beautiful artwork of the celebrated English illustrator Arthur Rackham, and an afterword by author and critic, Henry Hitchings. Designed to appeal to the booklover, the Macmillan Collector's Library is a series of beautiful gift editions of much loved classic titles. Macmillan Collector's Library are books to love and treasure.
Visa hela texten

Jonathan Swift was born in Dublin in 1667. He spent most of his childhood in Ireland until, aged twenty-one, he moved to England, where he found employment as secretary to the diplomat Sir William Temple. On Temple's death in 1699, Swift returned to Dublin to pursue a career in the Church. By this time he was also publishing in a variety of genres, and between 1704 and 1729 he produced a string of brilliant satires, of which Gulliver's Travels and A Modest Proposal are the best known. Between 1713 and 1742 he was Dean of St Patrick's Cathedral, Dublin, and he was buried there upon his death in 1745.